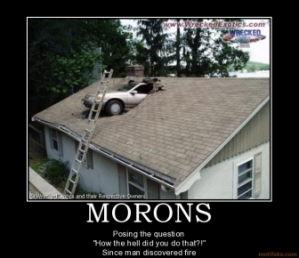 Let’s face it – English is a crazy language. There is no egg in eggplant, nor ham in hamburger; neither apple nor pine in pineapple.  English muffins weren’t invented in England or French fries in France. Sweetmeats are candies while sweetbreads, which aren’t sweet, are meat. We take English for granted. But if we explore its paradoxes, we find that quicksand can work slowly, boxing rings are square and a guinea pig is neither from Guinea nor is it a pig.  Take a look at these one liners…
1) The bandage was wound around the wound.
2) The farm was used to produce produce .
3) The dump was so full that it had to refuse more refuse.
4) We must polish the Polish furniture.
5) He could lead if he would get the lead out.
6) The soldier decided to desert his dessert in the desert.
7) Since there is no time like the present, he thought it was time to present the present .
8) A bass was painted on the head of the bass drum.
9) When shot at, the dove dove into the bushes.
10) I did not object to the object.
11) The insurance was invalid for the invalid.
12) There was a row among the oarsmen about how to row
13) They were too close to the door to close it.
14) The buck does funny things when the does are present.
15) A seamstress and a sewer fell down into a sewer line.
16) To help with planting, the farmer taught his sow to sow.
17) The wind was too strong to wind the sail.
18) Upon seeing the tear in the painting I shed a tear.
19) I had to subject the subject to a series of tests.
20) How can I intimate this to my most intimate friend?
That’s my story and I’m sticking to it! Have a great Monday people and whatever
you do, don’t forget to LAUGH IT UP! Peace, I am outta here, Eucman!

“I’ve been doing a lot of drinking here in Austin. Here’s how you know you’re having a good time – when you go for coffee in the morning and realize that the key to your hotel room is still in the door from the night before.” -Jimmy Kimmel

“A lawmaker in Nevada just introduced a new bill that would provide pets with medical marijuana. Weed for pets. Which raises the question: Is it possible for cats to sleep 25 hours a day?” -Jimmy Fallon

“Pope Francis said that one of the things he misses most about ordinary life is the ability to go out and eat pizza without being recognized. I wouldn’t worry. Nobody’s going to believe the guy who works at the pizza place when he says, ‘Hey, you know who came in today? The Pope.'” -Seth Meyers.

The maharajah of an Indian Province issued a royal decree. He ordered that no one was to kill any wild animals while he was the country’s leader. The decree was honored until there were so many Bengal Tigers running loose that the people revolted and threw the maharajah from power. This is the first known instance of the reign being called on account of the game.

Friday’s Movie Trivia of the day!‘ What movie is this quote from??? “I’m back!”

Answer:  Terminator 3! Yes, he’s back, and, boy, what a come back. In all his “Terminator” movies he says “I’ll be back.” Finally in the third one, he says “I’m back.” He says this after the new Terminator tries to tap into Arnie’s system and get him to kill John. Still, my favorite “Terminator” is the second one. Even though it used to scare me when I was little, it has become my favorite.

Using the grid below, how many words can you find? Each word must contain the central V and no letter can be used twice, however, the letters do not have to be connected. Proper nouns are not allowed, however, plurals are. There is at least one nine letter word.
O E R
D V B
R A O
Genius: 28 words. Excellent: 20 words. Good: 16 words. Average: 12 words.
ANSWER: above, adverb, ave, aver, brave, braved, braver, bravo, bravoed, deva, dove, drove, drover, ova, over, OVERBOARD, OVERBROAD, overdo, rave, raved, raver, rev, rove, roved, rover, var, verb, voe.

Which of these names doesn’t quite fit the list?
Alan
Alex
Andre
Carl
Dan
Eric
Paul
Pete
Robert
Look for answers to today’s quizzlers in TUESDAYS Jokes, Quotes, Quizzlers & Teases!  Like this newsletter? Want to receive it daily? Also, if you are on the list and do not want to continue to receive this email and would like your name removed from this distribution list, please send an email to the Eucman at Eucstraman@hotmail.com.  https://dailyjokesquotesquizzlersandteases.wordpress.com/