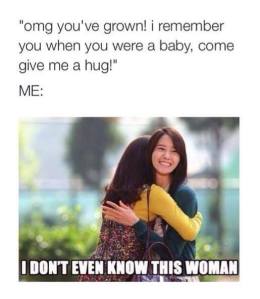 Weekend Ponderings……
When they ship styrofoam, what do they pack it in?
If 75% of all accidents happen within 5 miles of home, why not move 10 miles away?
Why doesn’t “onomatopoeia” sound like what it is?
Why do ‘tug’boats push their barges?
Why do we sing ‘Take me out to the ball game’, when we are already there?
Why are they called ‘stands’ when they’re made for sitting?
Why is there only ONE Monopolies Commission?
Why does one get in trouble for WRECKless driving?
Does a fish get cramps after eating?
Why does “slow down” and “slow up” mean the same thing?
Why is it when two planes almost hit each other it is called a “near miss”? Shouldn’t it be called a “near hit”?
What does Geronimo say when he jumps out of a plane?
Why do they sterilize the needles for lethal injections?
How do you KNOW it’s new and improved dog food?
Why do they put locks on the doors of 24-hour stores?
What do they use to ship styrofoam?
Why is it called rush hour when everything moves so slow?
Why do they call then express lanes when during rush hour everything is stopped?
Why is abreviation such a long word?
If sour milk is used to make yogurt, how do you know when yogurt has gone bad?
That’s my story and I’m sticking to it! Because I know because somebody out there is laughing! Have a great weekend
people and whatever you do, don’t forget to LAUGH IT UP! Peace, I am outta here, Eucman!

Who is wise in love, love most, say least. Alfred Lord Tennyson

Painting is a nail to which I fasten my ideas. Georges Braque

Sadly, it’s much easier to create a desert than a forest. James Lovelock

Progress might have been alright once, but it has gone on too long. Ogden Nash

Our greatest weakness lies in giving up. The most certain way to succeed is always to try just one more time. Thomas A. Edison

The will to win, the desire to succeed, the urge to reach your full potential… these are the keys that will unlock the

The big chess tournament was taking place at the Plaza in New York. After the first day’s competition, many of the winners were sitting around in the foyer of the hotel talking about their matches and bragging about their wonderful play. After a few drinks they started getting louder and louder until finally, the desk clerk couldn’t take any more and kicked them out.

The next morning the Manager called the clerk into his office and told him there had been many complaints about his being so rude to the hotel guests….instead of kicking them out, he should have just asked them to be less noisy. The clerk responded, “I’m sorry, but if there’s one thing I can’t stand, it’s chess nuts boasting in an open foyer.”

Thursday’s Movie Trivia of the day!‘ What movie is this quote from??? ‘Good, bad, I’m the one with the gun.’

Friday Movie Trivia of the day! What movie is this quote from???  ‘Put the candle BACK!’

Below are incomplete words. Place two letters in each bracket so that you can complete the word on the left and begin the word on the right. Good luck.
Perfu (–) rge
Barb (–) itor
Again (–) ain
Sta (–) sture
Giraf (–) deral
Featu (–) medy
Look for answers to today’s quizzlers in MONDAYS Jokes, Quotes, Quizzlers & Teases!  Like this newsletter? Want to receive it daily? Also, if you are on the list and do not want to continue to receive this email and would like your name removed from this distribution list, please send an email to the Eucman at Eucstraman@hotmail.com.  https://dailyjokesquotesquizzlersandteases.wordpress.com/
LINKS: www.slampi.org., www.hopeBUILD.org. http://myinvitepay.com/?ref=225785