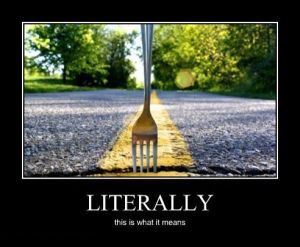 I wrote a few children’s books… Not on purpose.

I just got out of the hospital. I was in a speed reading accident. I hit a book mark and flew across the room.

I installed a skylight in my apartment…. The people who live above me are furious!

All of the people in my building are insane. The guy above me designs synthetic hairballs for ceramic cats. The lady across the hall tried to rob a department store… With a pricing gun… She said, “Give me all of the money in the vault, or I’m marking down everything in the store.”

While I was gone, somebody rearranged all the furniture in my bedroom. They put it in *exactly* the same place it was. When I told my roommate, he said: “Do I know you?”

In my house there’s this light switch that doesn’t do anything. Every so often I would flick it on and off just to check. Yesterday, I got a call from a woman in Germany. She said, “Cut it out.”

Doing a little work around the house. I put fake brick wallpaper over a real brick wall, just so I’d be the only one who knew. People come over and I’m gonna say, “Go ahead, touch it… It feels real.”

In my house on the ceilings I have paintings of the rooms above… So I never have to go upstairs.

One time the power went out in my house and I had to use the flash on my camera to see my way around. I made a sandwich and took fifty pictures of my face. The neighbors thought there was lightning in my house.

That’s my story and I’m sticking to it! Have a great Monday people and whatever you do,

don’t forget to LAUGH IT UP! Peace, I am outta here, Eucman!

“Starbucks may be phasing out cappuccinos after customers began to notice that they’ve disappeared from some stores across the country. Starbucks plans to focus on its best-selling menu items: milkshakes disguised as coffee.” -Jimmy Fallon

“The biggest blockbuster of the summer is coming out, and it stars Barack Obama. It’s a Disney picture called ‘Honey, I Shrunk the Economy.'” -Seth Meyers

A man with a wooden leg wanted to buy fire insurance for his leg. The first actuary quoted an annual premium of $500, estimating that the leg would burn once in 20 years and the value of the leg is $10,000. The second actuary quoted an annual premium of $50. When the second actuary was asked how he arrived at such a small figure, he replied, “This situation is right here in the fire schedule rating table.  The object is a wooden structure with an upper sprinkler, isn’t it?”

Friday’s Movie Trivia of the day!‘ What movie is this quote from??? “Rumble young man rumble!”

Answer:  Ali! At the weigh-in with Sonny Liston, Ali and his entourage say these words.

Monday Movie Trivia of the day! What movie is this quote from??? “They call me Cuban Pete. I’m the king of the rumba beat. When I shake my maracas I go chick chicky boom, chick chicky boom…”

The blanks below can be filled in with words spelled with the same four letters in different order. Find them.

When it was through,

ANSWER:  There once was a musical, CATS
It was performed in three ACTS
When it was through,
The audience flew
And all of the CAST went SCAT.

But not in a jungle

I rarely come in pairs

But I’m in every puzzle

Some think I’m in a xylophone

But, I most certainly am not

You don’t see me with a loan

But very strangely in a zealot

I’m in the magical prison of Azkaban

I’m in the buzz of a fan

But, my oh my what could I be?

Look for answers to today’s quizzlers in TUESDAYS Jokes, Quotes, Quizzlers & Teases!  Like this newsletter? Want to receive it daily? Also, if you are on the list and do not want to continue to receive this email and would like your name removed from this distribution list, please send an email to the Eucman at Eucstraman@hotmail.com.  https://dailyjokesquotesquizzlersandteases.wordpress.com/