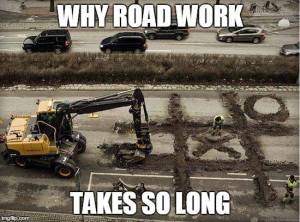 Here are a few pithy thoughts to ponder, mull over and chew on (although not necessarily in that order).

Artificial intelligence is no match for natural stupidity.

If you must choose between two evils, pick the one you’ve never tried before.

Not one shred of evidence supports the notion that life is serious.

Never, under any circumstances, take a sleeping pill and a laxative on the same night.

Don’t worry about what people think, they don’t do it very often.

Going to church doesn’t make you a Christian any more than standing in a garage makes you a car.

It is easier to ask forgiveness than permission.

For every action, there is an equal and opposite government program.

If you look like your passport picture, you probably need the trip.

Bills travel through the mail at twice the speed of checks.

A conscience is what hurts when all of your other parts feel so good.

No man has ever been shot while doing the dishes.

Junk is something you’ve kept for years and throw away three weeks before you need it.

There is always one more imbecile than you counted on.

Experience is a wonderful thing. It enables you to recognize a mistake when you make it again.

Someone who thinks logically provides a nice contrast to the real world.

If you had to identify, in one word, the reason why the human race has not achieved, and never will achieve, its full potential, that word would be “meetings.”

There is a very fine line between “hobby” and “mental illness.”

People who want to share their religious views with you almost never want you to share yours with them.

The one thing that unites all human beings, regardless of age, gender, religion, economic status or ethnic background, is that, deep down inside, we all believe we are above average drivers.

That’s my story and I’m sticking to it! Have a great Friday and whatever you do,

don’t forget to LAUGH IT UP! Peace, I am outta here, Eucman!

When one door of happiness closes, another opens, but often we look so long at the closed door that we do not see the one that has been opened for us. Helen Keller

In the hopes of reaching the moon men fail to see the flowers that blossom at their feet. – Albert Schweitzer

Happiness resides not in possessions and not in gold; the feeling of happiness dwells in the soul. Democritus

The happiness of your life depends upon the quality of your thoughts; therefore guard accordingly. Marcus Aurelius

People with many interests live, not only longest, but happiest. George Matthew Allen

Happiness is not a goal, but a by-product. Eleanor Roosevelt

Happiness is not achieved by the conscious pursuit of happiness; it is generally the by-product of other activities. Aldous Huxley

Penny was a hard working, conscientious girl, who lived on her own. Her dream in life was to go on an ocean cruise around the world. So she scrimped, and she saved, and she saved, and she scrimped until finally, one day, she had enough money to go on her ocean cruise. She booked passage on a cruise liner – first class all the way… The cruise started off in a grandiose scale, dancing and parties every night. But Penny was a cautious girl, so she never drank, but just danced the night away.

One night, after they had been at sea for a week, Penny was walking back to her cabin, when the heel on her left shoe broke throwing her off balance. If that wasn’t enough, the ship chose that moment to tilt to the left. As a result, Penny was thrown overboard. A hue and a cry were immediately raised, and after about five minutes they found Penny. Hauling her aboard, the ship’s crew realized that it was too late, poor Penny was dead.

Normally, they would have done a burial at sea, but as I said before, Penny was a very conscientious girl, and had written a will. In it, she specified that she wished for her body to be cremated, and kept in a jar on her parent’s fireplace mantel. Her wishes were fulfilled, which just goes to show you that a Penny saved is a Penny urned.

Thursday’s Movie Trivia of the day!‘ What movie is this quote from??? ‘I value my neck a lot more than three thousand bucks, Chief. I’ll find him for three, but I’ll catch him, and kill him, for ten.’

Answer: Jaws! Quint, the shark fisherman, to the people of Amity.

Friday Movie Trivia of the day! What movie is this quote from??? ‘We’ll use paper money for the jockey fee and expenses, but this will be for your entry money. We’ll use the gold sovereigns for luck.’

Unscramble the words below and follow the instructions in parentheses.

Now unscramble the letters you got to find your answer.

EVWOSL unscrambles to become WOLVES. Wolves have been known to hunt deer, beavers, shrews, bison, moose, and antelope, among other things. Although a pack of wolves generally likes bigger game like bison, a single wolf will eat smaller things like shrews. They will even eat earthworms and fruits if they must.

On July 7th, I had a most unusual day. I woke up at exactly 7:07, stumbled to my refrigerator and had a 7up. I got dressed, went downstairs, and caught the number 7 bus to go to my office on 77th street. While sitting in my office on the 7th floor, it dawned on me how my day was going so I called my bookie and placed a $777 bet on the number 7 horse in the seventh race, whose name was Seventh Heaven, to win.

Do you know what happened?

LOOK for answers to today’s quizzlers in MONDAYS Jokes, Quotes, Quizzlers & Teases!  Like this newsletter? Want to receive it daily? Also, if you are on the list and do not want to continue to receive this email and would like your name removed from this distribution list, please send an email to the Eucman at Eucstraman@hotmail.com.https://dailyjokesquotesquizzlersandteases.wordpress.com/