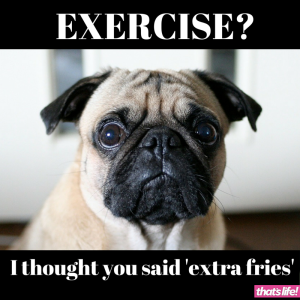 1. You get winded from knocking on the door.

2. You have to ask someone to chew your candy for you.

3. You ask for high fiber candy only.

4. When someone drops a candy bar in your bag, you lose your balance and fall over.

6. When the door opens you yell, “Trick or…” and you can’t remember the rest.

7. By the end of the night you have a bag full of restraining orders.

8. You carefully choose a costume that won’t dislodge your hair piece.

9. You’re the only Power Ranger in the neighborhood with a walker.

10. You avoid going to houses where your ex-wives live.

That’s my story and I’m sticking to it! Have a wonderful Wednesday and whatever you do,  don’t forget to LAUGH IT UP! Peace, I am outta here, Eucman!

“Fear is the tax that conscience pays to guilt.”

“The fear of death is more to be dreaded than death itself.”

“Fear is that little darkroom where negatives are developed.”

Two Eskimos sitting in a kayak were chilly, but when they lit a fire in the craft it sank – proving once and for all that you can’t have your kayak and heat it, too.

Two boll weevils grew up in South Carolina. One went to Hollywood and became a famous actor. The other stayed behind in the cotton fields and never amounted to much. The second one, naturally, became known as the lesser of two weevils.

Tuesday’s Movie Trivia of the day!‘ What movie is this quote from??? “Psychos don’t explode when sunlight hits them, I don’t care how crazy they are!”

Answer:   From Dusk Till Dawn! Seth says this to Carlos after he and his men knock the doors in and the vampires burn up in the sun. Carlos asks Seth if they were psychos. “Did they look like psychos?”

Wednesday Movie Trivia of the day! What movie is this quote from??? “It’s something you’ll remember forever, isn’t it? I know I will.”

Recently, Snow White’s seven dwarfs met up with three of their friends and went to the cinema to see Bambi. From the clues below, can you determine the order in which they stood in the ticket queue?

Sleepy was behind Stumpy, Smelly and Happy.

Happy was in front of Sleepy, Smelly and Bashful.

Bashful was behind Smelly, Droopy and Sleepy.

Dopey was in front of Droopy.

Sleepy was in front of Grumpy and Bashful.

Dopey was behind Sneezy, Doc and Sleepy.

Stumpy was in front of Dopey. Smelly was behind Doc.

Find out what the animals are! (for example, “To run away or escape” could be a “flea”)

2. Government head of a town/city

3. To sound low, husky, or grating

4. Relating to a group of singers

7. A mythical curse or bond

9. Thin thread-like outgrowth from the skin

LOOK for answers to today’s quizzlers in THURSDAYS Jokes, Quotes, Quizzlers & Teases!  Like this newsletter? Want to receive it daily? Also, if you are on the list and do not want to continue to receive this email and would like your name removed from this distribution list, please send an email to the Eucman at Eucstraman@hotmail.com.https://dailyjokesquotesquizzlersandteases.wordpress.com/