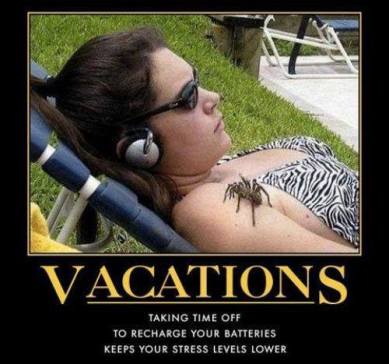 HERE ARE A FEW SIMPLE RULES FOR HAPPY LIVING…….

Avoid cutting yourself when slicing vegetables by getting someone else to hold the vegetables while you chop.

Avoid arguments with women about lifting the toilet seat by using the sink.

For high blood pressure sufferers – simply cut yourself and bleed for a few minutes, thus reducing the pressure on your veins. Remember to use a timer.

A mouse trap placed on top of your alarm clock will prevent you from rolling over and going back to sleep after you hit the snooze button.

If you have a bad cough, take a large dose of laxatives. You’ll be afraid to cough.

If you can’t fix it with a hammer, you’ve got an electrical problem.

Daily thought: Some people are like Slinkies…not really good for much but they bring a smile to your face when pushed down the stairs.

That’s my story and I’m sticking to it! Have a great Tuesday people, and whatever you do, don’t forget to LAUGH IT UP! Peace, I am outta here, Eucman!

“Harley-Davidson is recalling more than 100,000 motorcycles because of a problem with the clutch that could cause crashes. As opposed to that other thing that causes crashes: dads in a mid-life crisis who have no business riding a Harley.” -Jimmy Fallon

The all-you-can-eat chain Hometown Buffet has filed for bankruptcy. A spokesperson for the company said, ‘Good God, we didn’t realize just how much Americans can eat!'” -Conan O’Brien

“The British tabloid, The Mirror, published a story about a woman who faked her own death to break off a relationship after the man wouldn’t leave her alone. Ahh, yes, the old ‘It’s not you, I’m dead’ approach.” -Seth Meyers

Bill was short of money and was out looking for a job. Pastor Nelson offered Bill $500 to buy paint and paint the church. Well Bill went out bough some paint and started painting the church. He discovered that he was using more paint than he expected so the added some thinner to the paint, well it is still covered but not as well as it did at first. Well he still was using more paint than he wanted to use so he added still more thinner to the paint. Well the paint was too thin cover well but Bill still kept on painting. All of a sudden there was a bolt of lighting and a loud voice from the sky proclaimed, “Repaint and thin no more.”

Monday’s Movie Trivia of the day!‘ What movie is this quote from??? ‘He won’t kill us. He’s not that nice.’

Answer: Super Mario Bros! The idiots Iggy and Spike talking about what Koopa will do to them if they fail their mission.

Tuesday Movie Trivia of the day! What movie is this quote from??? ‘Well to make a long story short…’

In these Word Pyramids, the first letter is given to you (which is the first answer). Use the clues to build the pyramid to find the answer. In each consecutive answer, a letter is added to the previous answer. However, the answer letters might not be in the same order. Good Luck!!

I can run swiftly and silently when you want me to stay still,

I can move slowly and cautiously and am yours to fill.

You look at me often and yet you always forget me,

I am the most feared killer, yet you can’t live without me.

Sometimes you have me for all to spare,

Yet when you need me, I am not there.

You can waste me, or cherish me, you choose the track,

But once you’re done you can never get me back.

LOOK for answers to today’s quizzlers in WEDNESDAYS Jokes, Quotes, Quizzlers & Teases!  Like this newsletter? Want to receive it daily? Also, if you are on the list and do not want to continue to receive this email and would like your name removed from this distribution list, please send an email to the Eucman at Eucstraman@hotmail.com.https://dailyjokesquotesquizzlersandteases.wordpress.com/