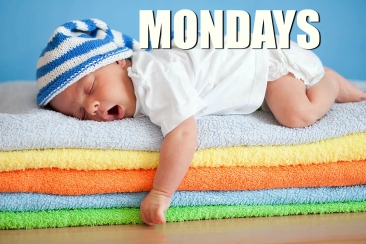 That’s my story and I’m sticking to it!  Have a great Monday people,

“The University of Texas has decided to allow students to carry guns in the classroom.
The school says it’s a guaranteed way to prevent the possibility of a pop quiz.” -Seth Meyers

“Whole Foods is looking into the idea of putting tattoo parlors in their grocery stores. Even so, the people walking out of Whole Foods with the biggest sense of regret will still be whoever just paid $8 for an apple.” -Jimmy Fallon

G U A R A N T E D T O M A K E Y O U L A F F….
Last October my wife bought a magnolia tree from the local nursery, but after
only a few weeks the leaves shriveled. It appeared to be on its last legs.

My wife took some leaf samples and marched into the nursery to demand an explanation.

“I know exactly what’s wrong with your magnolia,” said the manager.

This is a very touching scene from a great movie. The scene is where self-centered Charlie learns that he is the reason his brother Ray had to go away. The autistic Raymond (Rainman), played by Dustin Hoffman is telling his younger brother Charlie (Tom Cruise) about the day Raymond had to go live somewhere else because his parents were worried that he might accidentally harm his little brother. Dustin Hoffman won Best Actor.
Mondays Movie Trivia of the day!‘ What movie is this quote from??
1: “My given name is Benjamin Buford Blue, but people call me Bubba. Just like one of
them ol’ redneck boys. Can you believe that?”
2: “My name’s ___________, people call me ___________.”

Turn the word “THINK” into “BRAIN” by changing one letter at a time –
each new word must be a real word.

THINK
THICK
TRICK
TRACK
TRACT
TRAIT
TRAIN
BRAIN
Monday’s Quizzler is……….
They say I came from Africa.
I suppose that may be true.
But the type I am was mostly played
In a place where grass is blue.
Of wood and pearl, skin and steel,
You could say I am high strung.
My neck looks like a ladder,
With brass on every rung.

LOOK for answers to today’s quizzlers in TUESDAY’S Jokes, Quotes, Quizzlers & Teases!  Like this newsletter? Want to receive it daily? Also, if you are on the list and do not want to continue to receive this email and would like your name removed from this distribution list, please send an email to the Eucman at Eucstraman@hotmail.com.https://dailyjokesquotesquizzlersandteases.wordpress.com/
LINKS: http://www.slampi.org., http://www.hopeBUILD.org. http://www.GodLovesPraise.com, http://www.stlzoo.org