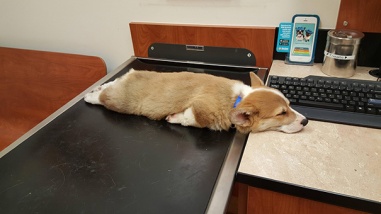 Short Medical Jokes…….
1) Long and Short of the Problem
Adam, an elderly man was seated in the doctor’s waiting room. When he was called in to see the doctor, Adam slowly got up, and, grasping his cane and hunching over, slowly made his way into the examining room.
After only a few minutes, Adam emerged from the room, walking completely upright. Paul, another patient who had watched him hobble into the room all hunched over, stared in amazement. ‘That must be a miracle doctor in there.’ he exclaimed. ‘What treatment did he give you? What’s his secret?’
Adam stared at Paul and said, ‘Well, the doctor looked me up and down, analysed the situation, and gave me a cane that was four inches longer than the one I had been using.’
2) Struck Down?
Ronan kept going to the ophthalmic doctor because his eye hurt and the doctor finally discovered his problem. The Doc told him, ‘Your eye hurts when you drink tea, so you can’t drink tea.’
Ronan stuttered, ‘But I love tea.’ Funny Doctors’ Jokes
The doctor replied, ‘Okay, as long as you take the spoon out.’
3) Time Cures
‘Doctor Mayo,’ John says, ‘Whenever I get up after a sleep, I feel dizzy for half an hour, then I’m all right.’
‘Then wait for half an hour before getting up,’ replies Doctor Mayo conclusively.
4) Home – Or Away?
A famous surgeon went on a safari in Africa. When he came back, his colleagues asked him how it had been. ‘Oh, it was very disappointing,’ he said. ‘I didn’t kill a thing. I’d have been better off staying here in the hospital.’
5) Father – Or Son?
Iain speaks frantically into the phone, ‘My wife is pregnant, and her contractions are only two minutes apart.’
‘Is this her first child?’ the doctor queries.
‘No, you idiot.’ Iain shouts. ‘This is her husband.’

That’s my story and I’m sticking to it! Have a great Monday people, and whatever you do, don’t forget to LAUGH IT UP! Peace, I am outta here, Eucman!

DAILY QUOTES…
“Scientists are now claiming that every hour spent running increases your lifespan by seven hours. In other words, a majority of Americans died three years ago.” -Conan O’Brien
“A high school boy in Georgia got the local police to help him stage a drug bust in order to ask a girl to prom. The police say they loved helping the two with the prom-posal, and look forward to seeing them together on prom night when they arrest them for underage drinking.” -James Corden
“Tax Day normally falls on April 15, but they moved it this year because the 15th was a Saturday, and I think it’s illegal to make people do math on Saturdays. It’s weird that the government more or less just trusts us to tell them how much we owe them. A restaurant wouldn’t do that.” -Jimmy Kimmel

G U A R A N T E D T O M A K E Y O U L A F F….
Manning the computer help desk for the local school district was my first job. And though I was just an intern, I took the job very seriously. But not every caller took me seriously.
“Can I talk to a real person?” a caller asked.
“I am real,” I said.
“Oh, I’m sorry,” the caller said. “That was rude of me. What I meant to say was, could I talk to someone who actually knows something?”

‘I don’t know — maybe you could, like, buy a horse and some diamonds.’
ANSWER: Pretty Woman! Kit says this to Vivian when they meet by the pool at the hotel and Vivian tells her all about Edward.
Monday Movie Trivia of the day! What movie is this quote from???
‘Come on! Come on! Where are you? You are in the clouds, and we are in a basement!’
Friday’s Quizzler is……….
What does this mean?
ENTURY
ANSWER: Long time no see (Century – C = ENTURY)

I’m seven times seventy,
Plus a decade more.
This has all happened before.
Red and gold, I am no liar.
My nursery will be made
From my funeral pyre.
Who am I?
LOOK for answers to today’s quizzlers in TUESDAYS Jokes, Quotes, Quizzlers & Teases!  Like this newsletter? Want to receive it daily? Also, if you are on the list and do not want to continue to receive this email and would like your name removed from this distribution list, please send an email to the Eucman at Eucstraman@hotmail.com.https://dailyjokesquotesquizzlersandteases.wordpress.com/
LINKS: http://www.slampi.org., http://www.hopeBUILD.org. http://www.GodLovesPraise.com, http://www.stlzoo.org