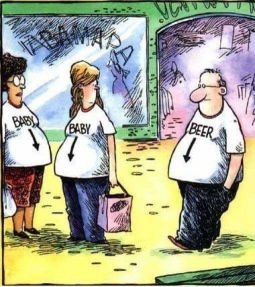 More Daffynitions…..
Abdicate: To give up all hope of having a flat stomach.
Adminisphere: The rarefied organizational layers beginning just above the rank and file. Decisions that fall from
the adminisphere are often profoundly inappropriate or irrelevant to the problems they were designed to solve.
Administrivia: All of the annoying little tasks associated with your job.
Adult: A person who has stopped growing at both ends and is now growing in the middle.
Aflockalypse: When all those birds fell out of the sky.
Aibohphobia: Fear of palindromes.
Aquadextrous: Possessing the ability to turn the bathtub tap on and off with your toes.
Arachnoleptic fit: The frantic dance performed just after you’ve accidentally walked through a spider web.
Arbitrator: A cook that leaves Arby’s to work at McDonald’s.
Aromatic: An automatic crossbow.
Assmosis: The process by which some people seem to absorb success and advancement by kissing up to the boss rather than working hard.
Avoidable: What a bullfighter tries to do.
Balderdash: A rapidly receding hairline.
Baloney: Some hemlines fall here.
Barbecue: A line of people waiting for a haircut.
Beauty Parlor: A place where women curl up and dye.
Beelzebug: Satan in the form of a mosquito, that gets into your bedroom at three in the morning and cannot be cast out.
Blamestorming: Sitting around in a group, discussing why a deadline was missed or a project failed, and who was responsible.
Bouyant: A male insect.
Bozone: The substance surrounding stupid people that stops bright ideas from penetrating. The bozone layer, unfortunately, shows little sign of breaking down in the near future.
Bungee Jumping: Suicide, with strings attached.
Burglarize: What a crook sees with.
Calories: Tiny creatures that live in your closet and sew your clothes tighter every night.
Cannibal: Someone who is fed up with people.
Carpetuation: The act of (when vacuuming) running over a piece of string at least a dozen times, bending over, picking it up,
examining it and then dropping it again to let the vacuum have another chance.
Cashtration: The act of buying a house, which renders the subject financially impotent for an indefinite period.
That’s my story and I’m sticking to it! Have a wonderful Wednesday people, and
whatever you do, don’t forget to LAUGH IT UP! Peace, I am outta here, Eucman!
DAILY QUOTES…
People who use attributable and obviously made-up quotes to make some clever point on the internet are the absolute worst. — Anonymous
The fabrication of Oscar Wilde quotes is among the noblest of endeavors. — Oscar Wilde
Dance, even if you have nowhere to do it but the living room in your fortified compound. — Kurt Vonnegut
Wear sunscreen. — Count Dracula
The use of CGI for Green Lantern’s costume is, frankly, a bit distracting. I wish they hadn’t done that. — David Ben-Gurion

The greatest thing about Facebook, is that you can quote something and totally make up the source. — George Washington

Tuesday’s Movie Trivia of the day!‘ What movie is this quote from???

‘You’re going down thirty years ago, pal. You just don’t know it yet.’
ANSWER: Frequency! Jim Caviezel’s character John Sullivan tells this to the cop
in the bar who is responsible for the Nightengale Murders.
Wednesday’s Movie Trivia of the day!‘ What movie is this quote from???
‘You said Paris was always a good idea.’
Tuesday’s Quizzler is……….
The following three (3) clues are the definitions of words that have been jumbled below and turned into anagrams.
Your job is to correctly unravel the anagrams and then place them next to their proper definition. Good luck!
1. hanging cloth used as a blind.
2. a strong English ale.
3. destined or inevitable.
Jumbled anagrams:
1. nice rat
2. car unit
3. rub not
ANSWER:
1. nice rat: Certain
2. car unit: Curtain
3. rub not: Burton
Rearranged anagrams now placed next to their correct definition:
1. hanging cloth used as a blind: Curtain
2. a strong English ale: Burton
3. destined or inevitable: Certain

What phrase does this rebus represent?
TUDETATI
TUTATIDE
ATTUDITE
ATTITUDE
LOOK for answers to today’s quizzlers in THURSDAYS Jokes, Quotes, Quizzlers & Teases!  Like this newsletter? Want to receive it daily? Also, if you are on the list and do not want to continue to receive this email and would like your name removed from this distribution list, please send an email to the Eucman at Eucstraman@hotmail.com.https://dailyjokesquotesquizzlersandteases.wordpress.com/
LINKS: http://www.slampi.org., http://www.hopeBUILD.org. http://www.GodLovesPraise.com, http://www.stlzoo.org