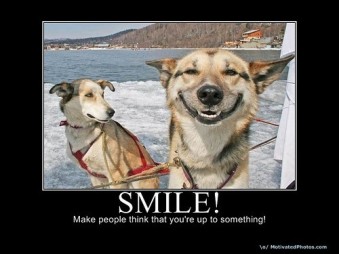 WELCOME to Friday, June 2, 2017.
If 1
If only one price can be obtained for a quotation, the price will be unreasonable.
If opportunity came disguised as temptation, one knock would be enough.
If people listened to themselves more often, they would talk less.
If reproducibility might be a problem, conduct the test only once.
If some people didn’t tell you, you’d never know they’d been away on vacation.
If something is confidential, it will be left in the photocopy machine.
If something is done wrong often enough, it becomes right.
If ‘success’ consisted simply of not taking chances, then ‘glory’ would be at the disposal of the most mediocre talent.
If the assumptions are wrong, the conclusions are not likely to be very good.
If the code and the comments disagree, then both are probably wrong.
If the probability of success is not almost one, it is damn near zero.
If the slightest probability for an unpleasant event to happen exists, the event will take place, preferably during a demonstration.
If there is a possibility of several things going wrong, the one that will cause the most damage will be the one to go wrong.
If there isn’t a law, there will be.
If there is a 50-50 chance that something can go wrong, then 9 times out of 10 – it will.
If there is light at the end of the tunnel…order more tunnel.
If things were left to chance, they would be better.
If two wrongs don’t make a right, try three.
If we learn by our mistakes, some of us are getting one hell of an education!
If you aim for the stars but only make it to the moon, remember there are people who have not yet made it to the moon.
If you are already in a hole, there is no use to continue digging.
If you are asked to join a parade, don’t march behind the elephants.
If you are coasting, you’re going downhill.
If you are feeling good, don’t worry. You’ll get over it.
If you are given two contradictory orders, obey them both.
If you are not the lead dog, the scenery never changes.
AND that’s my story and I’m sticking to it! Have a great weekend people and
whatever you do, don’t forget to LAUGH IT UP! Peace, I am outta here, Eucman!
DAILY QUOTES...
“Success is liking yourself, liking what you do, and liking how you do it.”
–Maya Angelou
“Time sneaks up on you like a windshield on a bug.”
–John Lithgow
“Do not anticipate trouble, or worry about what may never happen. Keep in the sunlight.” –Benjamin Franklin
G U A R A N T E D T O M A K E Y O U L A F F…. A very religious man fell into the quicksand. Firefighters come by and offer to help, but he says, “No, God will help me.” Next come the police, they offer to help. Again the man says, “No, God will help me.” He then sinks in the quicksand to his death. In heaven, he asks God why he didn’t
save him. God says, “What about the firemen and police I sent?” 😐😱😎
Thursday’s Movie Trivia of the day!‘ What movie is this quote from???
‘And if you ever get lonely, you can just go to the record store, and visit your friends.’
ANSWER: Almost Famous! In the film ‘Almost Famous’ Penny Lane (Kate Hudson)
explains to William (Patrick Fugit) what it’s like to be a groupie.
Friday’s Movie Trivia of the day!‘ What movie is this quote from??
‘How do you know I won’t be seeing what you’re seeing, in court!’
Thursday’s Quizzler is……….
Hidden below you will find five uncommon titles to five classic novels. Can you decipher them?
1. Vanished with the Tempest
2. Enmity of the Globes
3. Dinky Maidens
4. A Chronicle of a Couple of Municipalities
5. Contention and Conciliation
ANSWER:  1. Gone with the Wind  2. War of the Worlds  3. Little Women  4. Tale of Two Cities   5. War and Peace
Friday’s Quizzler is……….
At a train station in Sydney, Australia, an intelligent rich man was awaiting his upper class rail transport. He was sorting through his wallet and pulled out credit cards, receipts, and $200 in cash.
An egotistical scam artist (and a talented one at that) approached the man and said to him, “I’ll bet you, on all the money in your wallet, that I can get a packet of chips out of that snack machine without inserting any money!”
The rich man, who was intrigued by this ‘talent’, readily agreed.
The scam artist walked over to the snack dispenser, stuck his hand up through the compartments, and a chip packet fell out.
The rich man was amazed, but being a faithful businessman, stuck to his word, yet the scam artist walked off without a penny.
TODAY’S QUIZZMASTER OF THE DAY AWARD GOES TO MS. ANDREA L. BANKS! 🙌🙇🙌🙇🙅😎
LOOK for answers to today’s quizzlers in MONDAYS Jokes, Quotes, Quizzlers & Teases!  Like this newsletter? Want to receive it daily? Also, if you are on the list and do not want to continue to receive this email and would like your name removed from this distribution list, please send an email to the Eucman at Eucstraman@hotmail.com.https://dailyjokesquotesquizzlersandteases.wordpress.com/
LINKS: http://www.slampi.org., http://www.hopeBUILD.org. http://www.GodLovesPraise.com, http://www.stlzoo.org