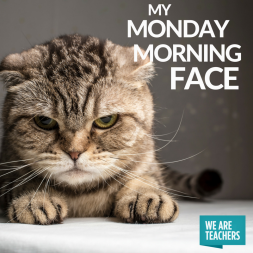 WELCOME to Monday January 14, 2019.
Here’s the story, the other day I received the following email from an old friend…Just a line to say I’m living, that I’m not among the dead, though I’m getting more forgetful and all mixed up in my head.  I got used to my Arthritis, to my dentures I’m resigned I can manage my Bifocals, but dear God I miss my mind, for sometimes I can’t remember when I stand at the foot of the stairs if I must go up for something  Or have I just come down from there?  And before the fridge so often my poor mind is filled with doubt have I just put some food away? Or have I come to take something out? And there’s a time, when it is dark I stop and hold my head I don’t know if I’m retiring or am I getting out
of bed?  So, If it is my turn to write to you there’s no need getting sore I may think that I have written and don’t want to be a bore so remember that you are my friend and I wish that you were near but now it’s nearly mail time, so must say “goodbye” Here I stand before the mail box with a face so very red Instead of mailing you my letter I went and opened it instead. Hmmm I’m wondering why she sent me this? Is she trying to tell me something? What was I doing? I was just saying “Whatever”

That’s my story and I’m sticking to it! HAVE A GREAT MONDAY PEOPLE!
Whatever you do, don’t forget to LAFF IT UP! Peace, I am outta here, Eucman!
DAILY QUOTES…

“A man in Vietnam was hospitalized after doctors realized that he had a pair of scissors in his digestive system that had been left there by a previous surgery that he had 18 years ago. I mean this guy is so lucky. Come on, free scissors! The sad part is after they sewed him up the second time the doctor was like, ‘Wait, where’s my watch?'” -James Corden

“A new study says we should change how we feed cows so they don’t produce so much of the greenhouse gas methane. First up, they recommend eliminating taco night.” -Conan O’Brien
“A new study found that running for two minutes is just as good for you as working out for 90 minutes. That doesn’t sound like a study it sounds like something a chubby guy says after being on the treadmill for two minutes.” -Jimmy Fallon

Guaranteed to Roll Your Eyes…
An influential Londoner wound up a business trip to the
Orient with a visit to Taipei. At a luncheon he was asked
to say a few words. Since he spoke not a word of Chinese,
his address was to be translated by an interpreter sentence
by sentence.

“I want you to know,” he began, “I’m tickled to death to be
asked here today.”

A look of panicked confusion appeared on the interpreter’s
face. “This poor man,” he said in Chinese, “Scratches him-
self until he dies, only to be with you today.” 😳

Friday’s Movie Trivia of the day!‘ What movie is this quote from???
“Do you like to gamble, Eddie? Gamble money on pool games?”
“Fats, let’s you and I shoot a game of straight pool.”

Answer: The Hustler!
In this scene pool hustler “Fast Eddie” Felson (Paul Newman) meets Minnesota Fats (Jackie Gleason), who is acknowledged to be the best pool player in the country. Eddie is anxious to play Fats and thinks he can beat him. Fats says line one and Eddie replies with line two. After a few hours of playing, Eddie is winning but professional gambler Bert Gordon (George C. Scott), who is watching the match, says to Fats, “Stay with this kid. He’s a loser.” There are quite a few thought-provoking scenes in this movie discussing the relative importance of talent vs. character in winning. In case you haven’t seen it yet, I won’t spoil it for you by revealing the outcome!

Monday’s Movie Trivia of the day! What movie is this quote from???

“Do you promise to tell the truth, the whole truth, and nothing but the truth, so help you God?”
“And then some.”

Take the given words, and by moving a single letter from one word to the other, make a pair of synonyms, or near synonyms. For example, given: Boast – Hip, move the ‘s’ from ‘Boast’ to ‘Hip’ creating two synonyms: Boat – Ship.

You are on your way to visit your Grandma, who lives at the end of the valley. It’s her birthday, and you want to give her the cakes you’ve made.

Between your house and her house, you have to cross 7 bridges, and as it goes in the land of make believe, there is a troll under every bridge! Each troll, quite rightly, insists that you pay a troll toll. Before you can cross their bridge, you have to give them half of the cakes you are carrying, but as they are kind trolls, they each give you back a single cake.

How many cakes do you have to leave home with to make sure that you arrive at Grandma’s with exactly 2 cakes?

LOOK for answers to today’s quizzlers in TUESDAYS, Jokes, Quotes, Quizzlers & Teases!  Like this newsletter? Want to receive it daily? Also, if you are on the list and do not want to continue to receive this email and would like your name removed from this distribution list, please send an email to the Eucman at Eucstraman@hotmail.com.https://dailyjokesquotesquizzlersandteases.wordpress.com/
RECOMMENDED WEBSITE LINKS:
http://www.slampi.org, http://www.hopeBUILD.org, www.GodLovesPraise.com, https://elisabethluxe.com, www.themuscleministry.com,
CHECK OUT MY BOOK online at https://www.amazon.com/dp/B07FF669PT/ref=sr_1_1?s=digital-text&ie=UTF8&qid=1531337765&sr=1-1&keywords=The+Banquet+Servers+Hand+Guide#,
Amazon.com: The Banquet Servers Hand Guide (Basic) eBook: Euclid Strayhorn: Kindle Store.  http://www.amazon.com