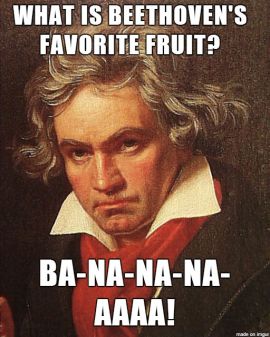 Following are actual answers from students on music tests…

– The principal singer of nineteenth century opera was called pre-Madonna.

– All female parts were sung by castrati. We don’t know ex-
actly what they sounded like because there are no known
descendants.

– Music sung by two people at the same time is called a
duel; if they sing without music it is called Acapulco.

– A virtuoso is a musician with real high morals.

– Contralto is a low sort of music that only ladies sing.

– Probably the most marvelous fugue was the one between the
Hatfields and the McCoys.

– I know what a sextet is but I’d rather not say.

– Johann Sebastian Bach wrote a great many musical com-
positions and had a large number of children. In between he
practiced on an old spinster which he kept up in his attic.

– Rock Monanoff was a famous post-romantic composer of piano concerti.

“I haven’t spoken to my wife in years. I didn’t want to interrupt her.”
– Rodney Dangerfield

“You don’t get anything clean without getting something else dirty.”
– Cecil Baxter

“Since we cannot know all that there is to be known about
anything, we ought to know a little about everything.”
– Blaise Pascal

“My grandfather’s a little forgetful, but he likes to give
me advice. One day, he took me aside and left me there.”
–Ron Richards

“According to a new survey, women say they feel more com-
fortable undressing in front of men than they do undressing
in front of other women. They say that women are too judg-
mental, where, of course, men are just grateful.
–Jay Leno

A wholesaler in New York sent a letter to the postmaster of
a small Midwestern town. He asked for the name of an honest
lawyer who would take a collection case against a local
debtor who had refused to pay for a shipment of the whole-
saler’s goods. He got this reply:

Dear Sir: I am the postmaster of this village and received
your letter. I am also an honest lawyer and ordinarily would
be pleased to accept a case against a local debtor.

In this case, however, I also happen to be the person you
sold those crummy goods to. I received your demand to pay
and refused to honor it. I am also the banker you sent the
draft to draw on the merchant, and I sent that back with a
note stating that the merchant had refused to pay.

If I were not, for the time being, substituting for the
pastor of our local church, I would tell you just what I
thought of your claim.😱

Tuesday’s Movie Trivia of the day!‘ What movie is this quote from???“William Wallace is seven feet tall.”
“Yes, I’ve heard. Kills men by the hundreds.”

Answer:    Braveheart!
In this scene William Wallace (Mel Gibson) addresses his troops just before a big battle with English troops. Wallace says, “Sons of Scotland! I am William Wallace.” One of the soldiers isn’t sure he really is Wallace and says the first line. Wallace replies with the second. This is the mostly true story of William Wallace, a commoner (although one source says he was a Scottish lord) who unites 13th-century Scotland in its battle to overthrow English rule (although documentation about the details is sketchy, at best). “Braveheart” won Best Picture in the 1996 Academy Awards and Mel Gibson won an Oscar for Best Director.

Wednesday’s Movie Trivia of the day! What movie is this quote from??? “Sir, you are no gentleman.”
“And you, miss, are no lady.”

Five people (who vaguely know each other and are really eccentric) have a great passion for music. Each of them plays a different instrument. However, they are constantly forgetting each other’s first and last names, the instrument they play, their ages and their professions. Your job is to figure out everyone’s full names, their ages, their favorite instrument and their jobs.
1.No person’s first name shares an initial with his/her last name.
2.Allen is always feeling sleepy because her neighbor has a habit of playing his drums in the middle of the night.
3.Neither of the women’s ages (who play the guitar and the piano) are an even number.
4.The flutist is older than Joseph, who is older than Ivan, who is not the youngest.
5.Michael, the scientist, is the oldest person in the group.
6.Angela’s last name makes Daniel feel hungry.
7.Joseph is 12 years older than the doctor, who is 26 years younger than the teacher.
8.Most people do not agree with the engineer (who is half as old as Coleman) that he plays the bagpipes excellently.
9.Julia’s career involves educating young minds.
10.The lawyer lives next to Julia Allen.
11.The pianist is not 21 years old.

Five guys meet at college, and become the best of buddies when they discover that they have a common interest in ten-pin bowling. Not only are they avid bowlers, but they also have an eccentric taste in the pattern on their bowling ball.
They each play for a different team during the week, but get together on Saturday nights to find out which of them is the best.
From the following clues, can you find out each of their names, the local team they play for, the pattern on their bowling ball, and how many points each scored in the first game.

1st Frame: The five buddies bowled in turn, in the following order: Fred; the bowler with the tiger print ball; the bowler who scored 227; Johnson; and the bowler who plays for the Golden Gates. Only the second bowler, Dawson, did not get a strike with his first delivery, although he did get a spare.

2nd Frame: The players with the top three scores, Eddie, the Snake Eyes’ bowler and the Picket Fences’ bowler, all managed strikes this frame, while Johnson and the Dead Woods’ bowler both got spares.

3rd Frame: The Dead Woods’ bowler had a terrible bowl, only knocking down three pins, but still managed to crack a joke with Dawson as Dave was hitting his turkey (third strike in a row).

4th Frame: Flagg, the Flying Elbows’ bowler and the bowler with the flame pattern ball all hit strikes. The Picket Fences’ bowler and Fred both got a spare.

5th Frame: Steve, the Snake Eyes’ bowler, the owner of the globe ball, and the Golden Gates’ bowler all had strikes. Garrett managed a spare.

6th Frame: This was nearly a disaster for the bowler with the leopard ball which just clipped the 7 pin on its way into the gutter. Luckily, he made the spare, which meant he scored more than the bowler with 192.

7th Frame: The bowler with the cow print ball was the only one to get a strike this round. Steve, the Flying Elbows’ bowler, the bowler with 214, and Hobson did not even get a spare.

8th Frame: Dave only managed a spare this frame, while Carl, who bowled just after him, got a strike. Neither of them ended up with 205 points.

9th Frame: The bowler with an intricate map of the world on his ball scored a strike this frame, as did Steve. Flagg got a spare.

10th Frame: The losers congratulated the ‘Flame’ thrower on a game well played, and Garrett went to the bar to get in the drinks as he had the lowest score with 186.