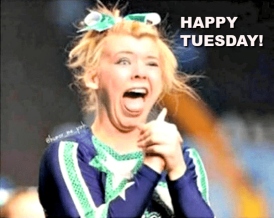 “The true measure of a man is how he treats someone who can do him absolutely no good.” – Samuel Johnson

“Rogues are preferable to imbeciles because they sometimes take a rest.” – Alexandre Dumas

“Today was the big day for online shopping. It’s known as Cyber

Monday. And of course, tomorrow is Identity Theft
Tuesday.” -Jay Leno
“Some public schools now will be serving sushi. Well, if you love

cafeteria meatloaf, you’re going to really love
cafeteria sushi!” -Dave Letterman
Guaranteed to Roll Your Eyes….
The banana loaf I was making was in the oven when my 16-year old came into the kitchen where the family had gathered. “That bread smells about done don’t you think, Mom?” he asked. I told him I had set the timer and it was fine. A little later he repeated his suggestion. “Mom, I really think that loaf is done. Maybe you should check it.” Always quick to come to my defense, my 13-year-old

I think she knows when to take it out.”😳😁
Monday’s Movie Trivia of the day! What movie is this quote from??? “She ate from her own plate. She ate with a spoon. Herself. And she folded her napkin.”
“Folded her napkin?”

Answer:   The Miracle Worker!
In this scene Annie Sullivan (Anne Bancroft) is reporting to Kate Keller (Inga Swenson) about her progress at breaking blind and deaf young Helen Keller (Patty Duke) of years of uncorrected bad habits. Annie says line one and a surprised Mrs. Keller asks line two. Annie adds, “The room’s a wreck, but her napkin is folded.” For years Helen had been permitted to wander around the dinner table and help herself by hand from everybody’s plate and Annie was determined to break her of this. The confrontation between the two was a battle royal, but Annie won. “The Miracle Worker” tells the true story of how 20-year-old Annie Sullivan was hired by the Keller family, just after the U.S. Civil War, as a last resort to teach their young daughter Helen how to communicate and live civilly. The Kellers were at wits end about what to do with Helen and Annie’s success probably saved Helen from being sent to an asylum.

Tuesday’s Movie Trivia of the day! What movie is this quote from???  “I pity your country ignorance from my heart.”
“And I despise your citified claptrap.”

For each of the following clues, what is a synonym that contains the letters CAT?

1.Baseball position
2.Copy
3.What you get with a doctor’s prescription
4.Underground cemetery
5.Time off from school or work
6.Ten-event contest
7.Disaster
8.Mimic
9.Cows
10.Teacher

In English, “re” is a prefix usually meaning “again”, such as in “rebuild” (build again). However, there are many words starting with “re” which have a totally different meaning without the “re”.

You will be given two definitions, one for a word starting with “re”, and one for the remaining word without the “re” (either definition could be given first).
Example: exhausting / ceasing employment
Answer: tiring / retiring