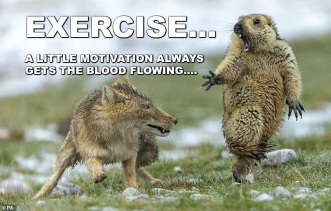 WELCOME to Wednesday October 30, 2019
Random Thoughts on Exercise……
My grandmother started walking five miles a day when she
was 60. She’s 97 now & we still don’t know where she is!
I joined a health club last year, spent about 400 bucks. Haven’t lost a pound.
Apparently you have to show up.
I have to exercise in the morning before my brain figures out what I’m doing.
I don’t exercise at all. If God meant us to touch our toes, he would have
put them further up our body.
I like long walks, especially when they are taken by people who annoy me.
I have flabby thighs, but fortunately my stomach covers them.
The advantage of exercising every day is that you die healthier.
If you are going to try cross-country skiing, start with a small country.

I don’t jog. It makes the ice jump right out of my glass.

That’s my story and I’m sticking to it! Have a wonderful Wednesday people and
whatever you do, don’t forget to laff it up! Peace, I am outta here! Eucman!
Quotes of the Day
“I never think of the future – it comes
soon enough.” – Albert Einstein
“Those who can make you believe absurdities
can make you commit atrocities.” – Voltaire
“Traditions are group efforts to keep the
unexpected from happening.”
– Barbara Tober
“Everybody likes a kidder, but nobody
lends him money.”- Arthur Miller
“I’ve been trying for some time to develop
a lifestyle that doesn’t require my presence.”

Guaranteed to Roll Your Eyes….
Ten Things A Cat Thinks About
1. I could have sworn I heard the can opener.
2. Is there something I’m not getting when humans make noise with their mouths?
3. Why doesn’t the government do something about dogs?
4. I wonder if Morris really liked 9-Lives, or did he have ULTERIOR motives?
5. Hmmm… If dogs serve humans, and humans serve cats, why can’t we cats ever get these STUPID dogs to do anything for us?
6. This looks like a good spot for a nap.
7. Hey — no kidding, I’m sure that’s the can opener.
8. Would humans have built a vast and complex civilization of their own if we cats hadn’t given them a reason to invent sofas and can openers in the first place?
9. If there’s a God, how can He allow neutering?
10. If that really was the can opener, I’ll play finicky just to let THEM know who’s boss!
Tuesday’s Movie Trivia of the day! What movie is this quote from??? “
“I’m a good girl, I am.”
Answer:  “My Fair Lady”
Audrey Hepburn plays Eliza Doolittle in the award winning 1964 film adaption of George Bernard Shaws’s play, “Pygmalion”. The film depicts the transformation of a Cockney gal into a society girl. When Rex Harrison’s character reminds Eliza of her birthplace in lower-class Lisson Grove she bursts into tears and cries “I’m a good girl, I am!” Julie Andrews played Eliza in the stage version. Jack Warner wanted a known star so Audrey Hepburn was cast in the movie adaptation. Hepburn’s vocals were dubbed in the musical numbers. At the time Andrews was not yet considered a box-office draw. Elizabeth Taylor reportedly also wanted the role. Belgium born Hepburn was a WWII occupation survivor who wanted to be a dancer.
Wednesday’s Movie Trivia of the day! What movie is this quote from???
“May I obey all of your commands with equal pleasure, sire.”
Tuesday’s Quizzler is….​
There are so many words. If you take the letters found in the word VALENTINES,
using the clues below, can you figure out the words that can be made?
1. A number between 8 and 10
2. A person owned by another person
3. An indigenous person
4. To express anger, or a heating duct opening
5. A person who stands watch and/or is watching
6. Necessary to existence or well-being of something
7. A type of beverage served in a pub
8. Agreeably tolerant or permissive
9. Lacking noise
10. Foreign Language
11. Goes away, or items that fall from trees and need raking

Seven letters are we,
Four different words we make.
Guess us or be ridiculed;
Your reputation’s at stake.

The first has pictures,
Paintings and such.
The second causes sneezing,
From ragweed or dust.
The third is an adverb,
It’s hard to explain
It’s the same as immensely
But it’s much more plain.
If you can act like a king,
this word you will sing.

These clues are sparse
This riddle may be tough.
But if you are smart
Then it will be enough.

LOOK for answers to today’s quizzlers in THURSDAYS, Jokes, Quotes, Quizzlers & Teases!  Like this newsletter? Want to receive it daily? Also, if you are on the list and do not want to continue to receive this email and would like your name removed from this distribution list, please send an email to the Eucman at Eucstraman@hotmail.com.https://dailyjokesquotesquizzlersandteases.wordpress.com/
RECOMMENDED WEBSITE LINKS:
http://www.slampi.org, http://www.hopeBUILD.org, http://www.GodLovesPraise.com, https://elisabethluxe.com, http://www.themuscleministry.com.
CHECK OUT MY BOOK online at https://www.amazon.com/dp/B07FF669PT/ref=sr_1_1?s=digital-text&ie=UTF8&qid=1531337765&sr=1-1&keywords=The+Banquet+Servers+Hand+Guide#, Amazon.com: The Banquet Servers Hand Guide (Basic) eBook: Euclid Strayhorn: Kindle Store. http://www.amazon.com
​