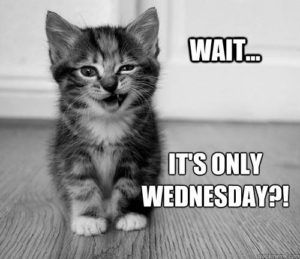 WELCOME to Wednesday, August 16, 2017.
Funny definitions………………..
1. Divorce : Future tense of marriage.
2. Cigarette: A pinch of tobacco rolled in paper with fire at one end and a fool on the other.
3. Lecture : An art of transferring information from the notes of the lecturer to the notes of the students without passing through the minds of either.
4. Compromise: The art of dividing a cake in such a way that everybody believes he got the biggest piece.
5. Tears : The hydraulic force by which masculine will-power is defeated by feminine water power.
6. Dictionary : A place where success comes before work.
7. Conference Room: A place where everybody talks, nobody listens and everybody disagrees later on.
8. Classic: A book which people praise, but do not read.
9. Smile : A curve that can set a lot of things straight.
10. Office: A place where you can relax after your strenuous home life.
11. Yawn: The only time some married men ever get to open their mouth.😎
12. Etc: A sign to make others believe that you know more than you actually do.
13. Committee: Individuals who can do nothing individually and sit to decide that nothing can be done together.
14. Experience: The name men give to their mistakes.
15. Atom Bomb : An invention to end all inventions.
16. Philosopher: A fool who torments himself during life, to be spoken of when dead.
17. Diplomat : A person who tells you to go to hell in such a way that you actually look forward to the trip.
18. Opportunist : A person who starts taking bath if he accidentally falls into a river.
19. Optimist: A person who while falling from Eiffel tower says in midway “See I am not injured yet.”
20. Miser : A person who lives poor so that he can die rich.
That’s my story and I’m sticking to it! Have a great Wednesday people and
whatever you do, don’t forget to LAUGH IT UP! Peace, I am outta here, Eucman!
DAILY QUOTES…
Give a man a match, and he’ll be warm for a minute, but set him on fire,
and he’ll be warm for the rest of his life.
The real trouble with reality is that there’s no background music.
Going to church doesn’t make you a Christian any more than
standing in a garage makes you a car.
Everyone is entitled to be stupid, but some abuse the privilege.
War doesn’t determine who’s right. War determines who’s left.
G U A R A N T E D T O M A K E Y O U L A F F…. In a Catholic school cafeteria, a nun places a note in front of a pile of apples, “Only take one.
God is watching.” Further down the line is a pile of cookies. A little boy makes his own note, “Take all you want. God is watching the apples.”😁
Tuesday’s Movie Trivia of the day!‘ What movie is this quote from???
“Where do you live?”
“In the city.”
“You have a house?”
“Apartment.”
“Own or rent?”
“Rent.”
“What do you do for a living?”
“Lots of things.”
“Where’s your office?”
“I don’t have one.”
“How come?”
“I don’t need one.”
“Are you married?”
“No.”
“How come?”
“It’s a long story.”
“You have kids?”
“No I don’t.”
“How come?”
“It’s an even longer story.”
“Are you my Dad’s brother?”
“What’s your record for consecutive questions asked?”
“38.”
“I’m your Dad’s brother alright.”
“You have much more hair in your nose than my dad.”
“How nice of you to notice.”
“I’m a kid – that’s my job.”
ANSWER: Uncle Buck! This is where Uncle Buck gets questioned by his
nephew Miles who doesn’t remember him. I love this movie. I really like the part
for Miles’ birthday, and Buck makes huge pancakes for breakfast, and later punches the clown in the nose.
Wednesday’s Movie Trivia of the day!‘ What movie is this quote from??
“No, no my dear. You will burn in Hell. But not I, for I am King…ordained by God!”
Tuesday’s Quizzler is……….
Can you decipher this phrase:
1) Rib
2) Rib <—
3) Rib <—
4) Rib
5) Rib <—
6) Rib
7) Rib <—
ANSWER: Prime Ribs
Wednesday’s Quizzler is……….
Aviva was planning to take a trip around the world. She liked names that were similar to hers, so she made a list of places she would like to visit.
However, one of these places doesn’t belong. Which one is it?
Arrawarra, Australia
Caraparac, Peru
Daba Qabad, Somalia
Krape Park, United States
Nagubugan, Philippines
Oktahatko, Florida
Ilokano, Polynesia
LOOK for answers to today’s quizzlers in THURSDAYS Jokes, Quotes, Quizzlers & Teases!  Like this newsletter? Want to receive it daily? Also, if you are on the list and do not want to continue to receive this email and would like your name removed from this distribution list, please send an email to the Eucman at Eucstraman@hotmail.com.https://dailyjokesquotesquizzlersandteases.wordpress.com/
LINKS: http://www.slampi.org., http://www.hopeBUILD.org. http://www.GodLovesPraise.com, http://www.stlzoo.org