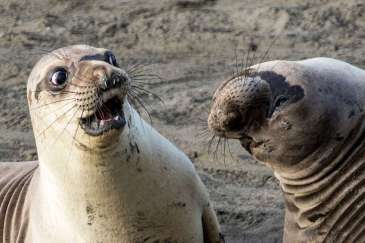 10 Bungling Burglar Stories… 1. Investigating a purse snatching in Brunswick, Georgia, detectives picked up a man who fit the thief’s description and drove him back to the scene. He was told to exit the car and face the victim for an ID. The suspect dutifully eyed the victim, and blurted, ‘Yeah, that’s the woman I robbed.’

2. In Nashville, they tell of a burglar who fell asleep on the sofa of the home he was robbing, only to be awakened by police.

3. In Thibodaux, Louisiana, a robber with a thick Cajun accent couldn’t get restaurant patrons to understand his demand for money. Frustrated, he whipped out his gun, but it wouldn’t fire. Grabbing the cash register, he ran……but got only three feet before falling down. The register was still plugged into the wall. Unplugging it, he tried again, but a diner knocked him to the him and called the police.

4. In Rhode Island, police were sure they had the right man when the suspect in a string of coin-machine thefts paid his $400 bail entirely in quarters.

5. Texas authorities, responding to a store robbery, seized a man who was fleeing naked. He said he’d stripped after the job because he figured his clothes would make him identifiable.

6. In Lawrence, Kansas, officers tracked a midnight thief who prided himself on his running speed by following the red lights on his high-tech tennis shoes.

7.In Virginia, a janitor went to great lengths to avoid ID. in a “Seven-Eleven” robbery, using a ski mask and rental car for the occasion. But he also wore his work uniform, which said “Cedar Woods Apartments” and had his name, Dwayne, stitched across the front.

8.Two robbers in Michigan, USA, entered a record shop nervously waving revolvers. The first one shouted, ‘Nobody move!’ When his partner moved, the startled first bandit shot him.😁😁😁😁😁

9.A robber, in a town in Germany, was caught after he escaped with his swag but he left his trousers behind. Police successfully arrested him at a railway station trying to board a train in his underpants.

10. A bungling Australian car thief was nabbed after accidentally locking himself in the vehicle he was trying to steal in Adelaide, Australia.

That’s my story and I’m sticking to it! Have a great Monday people, and whatever you do,don’t forget to LAUGH IT UP! Peace I am outta here, Eucman!

“A giant snowstorm hit the entire East Coast today. People spent the morning posting
pictures of the storm on Facebook, and Facebook spent the afternoon selling them.” -Jimmy Fallon

“A new poll has found that a majority of Americans believe the government is spying
on them. ‘No, we’re not,’ said your microwave.” -Seth Meyers

G U A R A N T E D T O M A K E Y O U L A F F….
In a criminal justice system based on 12 individuals not smart enough to get out of jury duty, here is a jury of which to be proud. A defendant was on trial for murder.  There was strong evidence indicating guilt, but there was no corpse.  In the defense’s closing statement the lawyer, knowing that his client would probably be convicted, resorted to a trick. ‘Ladies and gentlemen of the jury, I have a surprise for you all, ‘the lawyer said as he looked at his watch.  ‘Within one minute, the person presumed dead in this case will walk into this courtroom.  ‘He looked toward the courtroom door.  The jurors, somewhat stunned, all looked on eagerly. A minute passed.  Nothing happened. Finally the lawyer said, ‘Actually, I made up the previous statement. But you all looked on with
anticipation. I, therefore, put it to you that you have a reasonable doubt in this case as to whether anyone was killed, and I insist that you return a verdict of not guilty.’ The jury, clearly confused, retired to deliberate.  A few minutes later, the jury returned and pronounced a verdict of guilty. ‘But how?’ inquired the lawyer.  ‘You must have had some doubt; I saw all of you stare at the door.’  The jury foreman replied, ‘Yes, we did look, but your client didn’t look he just stared straight ahead.’😐

Friday’s Movie Trivia of the day!‘ What movie is this quote from???
‘You were suppose to fire UP! WE both fired up! It’s like living with a six year old!’

This is from one of my favorite movies. It’s a classic Lorne Micheals produced flick featuring Chevy Chase, Steve Martin and Martin Short. This line is from the famous Invisible Swordsman and Singing Bush scene.

Mondays Movie Trivia of the day!
‘Haha you fool! You’ve fallen for one of the classic blunders! The most famous is never get involved in a land war in Asia, but only slightly less well known is this: Never go against a Sicillian when DEATH is on the line!’

Using the following hints, how can you get from the first word to the fourth word to the seventh word?

ANSWER:  Giant to Big to Bit to Bite to Chew to Hew to Chop.

Monday’s Quizzler is……….
Complete the words below using three consecutive letters in alphabetical order, e.g. _ _ A _ U S; add A B and C it would become ABACUS.

LOOK for answers to today’s quizzlers in TUESDAY’S Jokes, Quotes, Quizzlers & Teases!  Like this newsletter? Want to receive it daily? Also, if you are on the list and do not want to continue to receive this email and would like your name removed from this distribution list, please send an email to the Eucman at Eucstraman@hotmail.com.https://dailyjokesquotesquizzlersandteases.wordpress.com/
LINKS: http://www.slampi.org., http://www.hopeBUILD.org. http://www.GodLovesPraise.com, http://www.stlzoo.org