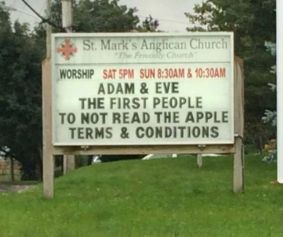 Ponderings…..
Why is it that when you’re driving and looking for an address, you turn down the volume on the radio?

Why is lemon juice made with artificial flavor, and dishwashing liquid made with real lemons?

Can you buy an entire chess set in a pawn shop?

Daylight savings time – why are they saving it and where do they keep it?

Did Noah keep his bees in archives?

Do jellyfish get gas from eating jellybeans?

Do stars clean themselves with meteor showers?

Do you think that when they asked George Washington for ID that he just whipped out a quarter?

That’s my story and I’m sticking to it! Have a wonderful Wednesday people, and whatever you do, don’t  forget to LAUGH IT UP! Peace I am outta here, Eucman!

DAILY QUOTES...
My family is really boring. They have a coffee table book called Pictures
We took Just to Use Up the Rest of the Film.” –Cynthia Levin

“There’s got to be something wrong with people who go to Star Trek conventions.
I mean, I like Mary Tyler Moore, too, but I don’t rent out a big hall and dress up like Rhoda.” –Andy Kindler

“I’m a grown woman but my father still thinks I know nothing about my car. He always asks me, ‘You changing the oil every 3,000 miles?’ ‘Yes, Dad. I’m also putting sugar in the gas tank. That way my exhaust smells like cotton candy.'” –Mimi Gonzalez

A dottering, old professor of logic asked his College class a question.

A student in the back of the class raised his hand and when called upon said, “Professor, you’re 70.”

The old professor said, “You’re absolutely correct, but tell me, how did you arrive at the answer so quickly?”

Tuesday’s Movie Trivia of the day!‘ What movie is this quote from???

“I’m packing your extra pair of shoes and your angry eyes!”

ANSWER:  Toy Story 2!
Andy went to summer camp and the toys discovered a new adventure, they had to rescue Woody from an evil toy collector who kidnapped him. Woody did not know that he was a valuable collectable. Mrs. Potato Head said this to Mr. Potato Head he when getting ready for the rescue mission.
Wednesdays Movie Trivia of the day!
“I don’t need a reason to be angry with God.”
Tuesday’s Quizzler is……
In this teaser, I have given you 4 words. Beside each word is a series of letter groupings. Your task is to find the answer to
the word on the left by choosing one letter from each of the letter groups to the right of each clue.

Wednesday’s Quizzler is……….
Mr. Jones filed a lawsuit against the company he worked for. He claimed that the company he worked for was drugging him
to make him a better worker. He claimed that the coffee the company provided contained a drug called Trimethylxanthine.
Trimethylxanthine is an addictive drug that increases alertness, improves concentration, and gives you a euphoric feeling.
It operates using the same mechanisms that amphetamines, cocaine, and heroin use to stimulate the brain only to a lesser
degree. When the coffee was tested it was found that it did contain large amounts of Trimethylxanthine.
But, Mr. Jones did not win his lawsuit. Why?
LOOK for answers to today’s quizzlers in THURSDAY’S Jokes, Quotes, Quizzlers & Teases!  Like this newsletter? Want to receive it daily? Also, if you are on the list and do not want to continue to receive this email and would like your name removed from this distribution list, please send an email to the Eucman at Eucstraman@hotmail.com.https://dailyjokesquotesquizzlersandteases.wordpress.com/
LINKS: http://www.slampi.org., http://www.hopeBUILD.org. http://www.GodLovesPraise.com, http://www.stlzoo.org