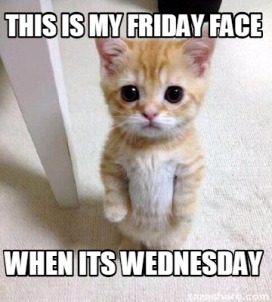 WELCOME to Wednesday July 11, 2018.
Business……
Eighty percent of all people consider themselves to be above average.
Enough research will tend to support your theory.
Entropy has us outnumbered.
Error is often more earnest than truth.
Even a stopped clock is right twice a day.
Even if the grass is greener on the other side: they, like you, still have to cut it.
Even paranoids have enemies.
Every silver lining has a cloud around it.
Every solution breeds new problems.
Everybody is somebody else’s weirdo😁😎

That’s my story and I’m sticking to it! Have a wonderful  Wednesday people, and whatever you do, don’t forget to LAUGH IT UP! Peace I am outta here, Eucman!

DAILY QUOTES…A government that robs Peter to pay Paul can always depend on the support of Paul.  George Bernard Shaw

A James Cagney love scene is one where he lets the other guy live. Bob Hope

A lot of baby boomers are baby bongers. Kevin Nealon

A nickel ain’t worth a dime anymore. Yogi Berra

year. I told him, “At my age, I don’t even buy green bananas.” Claude Pepper

A successful man is one who makes more money than his wife can spend. A

successful woman is one who can find such a man. Lana Turner

A two-year-old is kind of like having a blender, but you don’t have a top for it. Jerry Seinfeld

She booked passage on a  cruise liner – first class all the way… The cruise started off in a
grandiose scale, dancing and parties every night. But Penny was a  cautious girl, so she
never drank, but just danced the night away.

One night, after they had been at sea for a week, Penny was walking back  to her cabin, when the heel on her left shoe broke throwing her off  balance. If that wasn’t enough, the ship chose that moment to tilt to  the left. As a result, Penny was thrown overboard. A hue and a cry were immediately raised, and after about five minutes they found Penny.  Hauling her aboard, the ship’s crew realized that it was too late, poor Penny was dead.

Normally, they would have done a burial at sea, but as I said before,  Penny was a very conscientious girl, and had written a will. In it, she  specified that she wished for her body to be cremated, and kept in a jar on her parent’s fireplace mantel. Her wishes were fulfilled, which just goes to show you that a Penny saved is a Penny urned.😱😱😱

Tuesday’s Movie Trivia of the day!‘ What movie is this quote from??? “I am the eater of worlds, and of children! I am invincible!”

ANSWER: IT! Pennywise states this in the sewer, when the Loser’s Club were kids. But they prove that he isn’t so invincible in the end.

Wednesday’s Movie Trivia of the day! What movie is this quote from??? “Don’t worry about me. So, what’s in the bag?”

Down below the shining moon, Around the trees, a sacred gloom, Running with the midnight sky, Knowing the thing that makes you cry, Night is full with my essence, Eternal light betrays my presence, Soaring through my endless task, Shadows are my faithful mask😁

Answer:  Darkness (the first letter of every sentence spells out “DARKNESS”)

Write a table that contains a row of letters and a row of numbers where you can clearly tell that A=1, B=2, C=3 etc
until Z=26. Using it, decipher the clues to find a nine letter word which could describe someone evil.