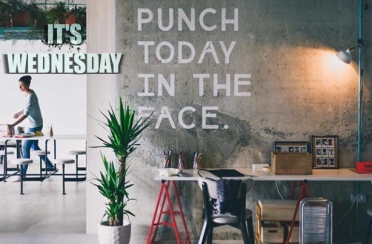 Polynesia: memory loss in parrots.
Oh Lord, give me patience…and GIVE IT TO ME NOW!
A good pun is its own reword.
Join the Army, meet interesting people, kill them.
I used to be indecisive. Now I’m not sure..
I’m writing a book. I’ve got the page numbers done.
Laughing stock: cattle with a sense of humor.
Why do psychics have to ask you for your name?
Wear short sleeves! Support your right to bare arms!
To err is human, to moo bovine.
For Sale: Parachute. Only used once, never opened, small stain.

That’s my story and I’m sticking to it! Have a wonderful Wednesday people, and whatever you do, don’t forget to LAUGH IT UP! Peace I am outta here, Eucman!

Humor is a reminder that no matter how high the throne one sits on, one sits on one’s bottom. Taki 😁😎

Humor is perhaps a sense of intellectual perspective: an awareness that  some things are really important, others not; and that the two kinds are  most oddly jumbled in everyday affairs. Christopher Morley

Humor is merely tragedy standing on its head with its pants torn. Irvin S. Cobb

Humor results when society says you can’t scratch certain things in public, but they itch in public. Tom Walsh

Humor has a way of bringing people together. It unites people. In fact,  I’m rather serious when I suggest that someone should plant a few  whoopee cushions in the United Nations. Ron Dentinger

Every survival kit should include a sense of humor. Author Unknown

Humor is the great thing, the saving thing. The minute it crops up, all  our irritation and resentments slip away, and a sunny spirit takes their  place. Mark Twain

At the school where my mother worked, the two first-grade teachers were Miss Paine and Mrs. Hacking.

One morning the mother of a  student called in the middle of a flu epidemic to excuse her daughter from school.

“Is she in Paine or Hacking?” the school secretary asked.

Tuesday’s Movie Trivia of the day!‘ What movie is this quote from???  The Dean is delivering the grade results to House Delta, looks up and sees the inebriated Flounder and advises him “0.2… Fat, drunk and stupid is no way to go through life, son” in which 1978 film?

ANSWER: Animal House! The Delta House is the worst on campus and Dean Wormer is looking for any opportunity to get rid of them. Their grade scores are the start of his ammunition, but his ultimate plan is “Secret Double Probation”. Dean Vernon Wormer is played by the late John Vernon and his above named victim, Kent “Flounder” Dorfman by the late Stephen Furst. Directed by John Landis the film also starred John Belushi and Donald Sutherland.

Wednesday’s Movie Trivia of the day! What movie is this quote from??? In which classic holiday movie did Aunt Bethany get a little confused about what she was being asked, and respond with: “Grace? She passed away 30 years ago!”?

A farmer challenges an engineer, a physicist, and a mathematician to fence off the largest amount of area using the least amount of fence.

The engineer made his fence in a circle and said it was the most efficient.

The physicist made a long line and said that the length was infinite. Then he said that fencing half of the Earth was the best.

The mathematician laughed at the others and with his design, beat the others. What did he do?

Answer:  The mathematician made a small fence around himself and declared himself to be on the outside.