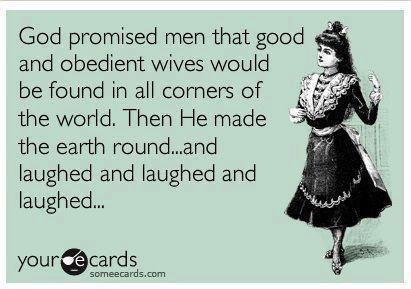 Wise thoughts…
1. Never take life seriously. Nobody gets out alive anyway.
2. Health is merely the slowest possible rate at which one can die.
3. Give a person a fish and you feed them for a day; teach a person to use the Internet
and they won’t bother you for weeks.

4. Some people are like Slinkies… not really good for anything, but you still can’t help
but smile when you see one tumble down the stairs… 😁
5. Health nuts are going to feel stupid someday, lying in hospitals dying of nothing…

6. Whenever I feel blue, I start breathing again.

7. All of us could take a lesson from the weather. It pays no attention to criticism.
8. Why does a slight tax increase cost you two hundred dollars and a substantial tax
cut saves you thirty cents?

9. In the 60’s people took acid to make the world weird. Now the world is weird and
people take Prozac to make it normal.
10. Politics is supposed to be the second oldest profession. I have come to realize that
it bears a very close resemblance to the first. 😱🙏😁

That’s my story and I’m sticking to it! Have a wonderful Wednesday people,

and whatever you do, don’t forget to LAUGH IT UP!
Peace I am outta here, Eucman!😁😎

DAILY QUOTES… “I love people who make me laugh. I honestly think it’s the thing I like most, to laugh. It cures a multitude of ills. It’s probably the most important thing in a person.” ― Audrey Hepburn

“There is nothing in the world so irresistibly contagious as laughter and good humor.”
― Charles Dickens, A Christmas Carol
“Laughter is wine for the soul – laughter soft, or loud and deep, tinged through with seriousness – the hilarious declaration made by man that life is worth living.” ― Seán O’Casey
“Laughter and tears are both responses to frustration and exhaustion. I myself prefer to laugh, since there is less cleaning do to do afterward.” ― Kurt Vonnegut
“And I have one of those very loud, stupid laughs. I mean if I ever sat behind myself in a movie or something, I’d probably lean over and tell myself to please shut up.”
― J.D. Salinger, The Catcher in the Rye
“With mirth and laughter let old wrinkles come.”
― William Shakespeare, The Merchant of Venice

G U A R A N T E D T O M A K E Y O U L A F F…. An elderly parish priest was tending his garden near a convent when a passerby stopped to inquire after the priest’s much-loved roses.

“Not bad,” said the priest, “but they suffer from a disease
peculiar to this area known as the black death.”

“What on earth is that?” asked the passerby, anxious to
increase his garden knowledge.

ANSWER: The Terminator! Sarah Connor (Linda Hamilton), by the end of this 1984 film, knows that most of the world’s population will be dead after a worldwide nuclear cataclysm destined to occur on August 29, 1997. That’s some storm.

Wednesday’s Movie Trivia of the day! What movie is this quote from??? “Man, if this is their idea of Christmas, I can’t wait to see what they have in mind for New Year’s!”

Tuesday’s Quizzer is……. Complete these words using every letter of the alphabet once only…

What advice is shown below?