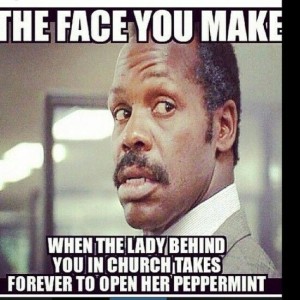 CHURCH BULLETIN BLOOPERS
11. Tuesday at 4 PM there will be an ice cream social. All
ladies giving milk will please come early.

12. A bean supper will be held on Tuesday evening in the
church hall. Music will follow.

13. Mrs. Johnson will be entering the hospital this week for
testes.

14. Please join us as we show our support for Amy and Alan
who are preparing for the girth of their first child.

15. The Lutheran Men’s group will meet at 6 PM. Steak,
mashed potatoes, green beans, bread and dessert will be
served for a nominal feel.

16. The Associate Minister unveiled the church’s new tithing
campaign slogan last Sunday: “I Upped My Pledge – Up Yours.”

18. The service will close with Little Drops of Water. One
of the ladies will start quietly and the rest of the
congregation will join in.

19. Eight new choir robes are currently needed, due to the
addition of several new members and to the deterioration of
some older ones.

20. The senior choir invites any member of the congregation
who enjoys sinning to join the choir.

That’s my story and I’m sticking to it! HAVE A GREAT WEEKEND PEOPLE! Whatever you do, don’t forget to LAFF IT UP! Peace, I am outta here, Eucman!

DAILY QUOTES…
“Success usually comes to those who are too busy to be
looking for it.” – Henry David Thoreau

“Hide not your talents, they for use were made. What’s
a sun-dial in the shade?” – Benjamin Franklin

God help me, I’ve entered the Age of Skirted Swimwear. This
is the age right after Accessorizing with Reading Glasses
and a few years before Can’t Name Anyone on the Radio.

Applicants for jobs at the company where my friend Diana
works are asked to fill out a questionnaire. Among the
things candidates list is their high school and when they
attended. One prospective employee dutifully wrote the name
of his high school, followed by the dates attended: Monday,
Tuesday, Wednesday, Thursday and Friday.

According to a new medical study, it’s healthy for a wife to
get angry at her husband than to keep it all inside which can
lead to disease. So guys when the wife runs you over with the
SUV, she’s just trying to live a healthier lifestyle.”😱

In my sociology class, we were instructed to write down
answers to some questions the teacher was asking.

“Next question,” announced the instructor. “How would you
like to be seen by the opposite sex?”

I was thinking about my answer when the young woman next
to me turned and asked, “How do you spell ‘intellectual?'”

Thursday’s Movie Trivia of the day!‘ What movie is this quote from???

“Can we open up the window, professor? It’s hot in here.”
“Your comfort comes second to my ability to hear my own voice.”

ANSWER:  A Beautiful Mind
This movie tells the true story of brilliant math prodigy John Nash, Jr. (Russell Crowe) and how he overcame years of suffering from schizophrenia to win a Nobel Prize. In this scene at his job teaching a college class at MIT, he has shut the classroom windows to cut down on the noise from a construction crew just outside his building. It’s a hot day and one of his students asks line one. Nash replies with line two. My favorite line from this movie is from his Nobel Prize acceptance speech, when he looks at his wife Alicia (Jennifer Connelly) in the audience and says, “You are the reason I am. You are all my reasons.” In the 2002 Academy Awards “A Beautiful Mind” won four Oscars, including Best Picture. Jennifer Connelly won an Oscar for Best Actress in a Supporting Role and Ron Howard won an Oscar for Best Director. Russell Crowe was nominated for Best Actor (but lost to Denzel Washington in “Training Day”). Strictly speaking, there is no Nobel Prize in mathematics. The prize Nash won was in economics (although that category was not created in Alfred Nobel’s will and was added in 1969).

Friday’s Movie Trivia of the day! What movie is this quote from???

Can you decipher this phrase?

The hint refers to what the white rabbit said in Alice in Wonderland.

Homer had suffered a bizarre accident that affected his eyesight. The doctor said it would be temporary, but for the next 4 weeks, he had to adjust how he did some things. The accident had affected his focal length. He was only able to focus on objects that were 6 or more feet away from him, anything closer than 6 feet was just a blur.
Homer was used to shaving up close in front of his bathroom mirror. Now after the accident, how close could Homer get to the mirror to see his face clearly enough to shave?

LOOK for answers to today’s quizzlers in MONDAY’S Jokes, Quotes, Quizzlers & Teases!  Like this newsletter? Want to receive it daily? Also, if you are on the list and do not want to continue to receive this email and would like your name removed from this distribution list, please send an email to the Eucman at Eucstraman@hotmail.com.https://dailyjokesquotesquizzlersandteases.wordpress.com/