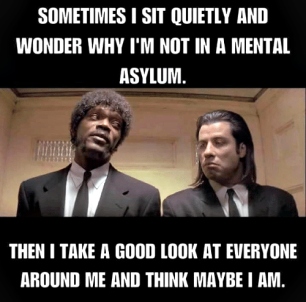 WHAT IS THE DEFINITION OF…?

That’s my story and I’m sticking to it! HAVE A WONDERFUL WEDNESDAY PEOPLE!
Whatever you do, don’t forget to LAFF IT UP! Peace, I am outta here, Eucman!
DAILY QUOTES…

As soap is to the body, so laughter is to the soul. — A Jewish Proverb

As soon as you have made a thought, laugh at it. — Lao Tsu

At the height of laughter, the universe is flung into a kaleidoscope of new possibilities. — Jean Houston

Cancer is probably the unfunniest thing in the world, but I’m a comedian, and even cancer couldn’t stop me from seeing the humor in what I went through. — Gilda Radner

Each of us has a spark of life inside us, and our highest endeavor ought to be to set off that spark in one another. — Kenny Ausubel

Even the gods love jokes — Plato

Everyone is so afraid of death, but the real Sufis just laugh: nothing tyrannizes their hearts. What strikes the oyster shell does not damage the pearl.” — Mevlana Rumi

From there to here, from here to there, funny things are everywhere. — Dr. Seuss

God is a comedian playing to an audience too afraid to laugh. — Voltaire

Grim care, moroseness, and anxiety—all this rust of life ought to be scoured off by the oil of mirth. Mirth is God’s medicine. — Henry Ward Beecher

G U A R A N T E D T O M A K E Y O U L A F F….
Don goes into business for himself. He buys a hotdog cart
and sets it up in a prime spot on a busy downtown corner,
right near a large bank.

One day, his friend Jim approaches him and asks Don if he
can lend him some money.

“But why?” asks Jim. “Everyone knows you’re doing well, and
I’m not asking for much.”

“Well, Jim, in order to get this spot I had to sign a Non-
competition Agreement with that bank over there. According
to the terms of the agreement, they’re don’t sell hot dogs,
and I don’t lend money.”😎

Tuesday’s Movie Trivia of the day!‘ What movie is this quote from???
“Laura! … Laura! … Laura!”
“That was the night that I died, and someone else was saved. Someone who was afraid of water, but learned to swim. Someone who knew
there would be one moment when he wouldn’t be watching. Someone who knew that the darkness from the broken lights would show the way.”
Answer: Sleeping with the Enemy
In this scene, Martin Burney (Patrick Bergin) is calling his wife’s name frantically from a sailboat and his wife Laura (Julia Roberts) begins a voiceover, explaining to the audience how she manages to fake her death at sea and get away from her abusive, controlling, obsessive husband. He has talked her into taking a night sailboat ride and when he isn’t looking she jumps overboard and hides behind a nearby buoy. She has previously broken some overhead boardwalk lights near their beach home so she will know in what direction to swim back. She then moves from Cape Cod to Iowa and assumes a new identity. He at first thinks she has drowned, but gradually realizes she has run away from him and a thriller of a story develops. I won’t tell you the ending in case you haven’t seen it!
Wednesday’s Movie Trivia of the day! What movie is this quote from???
“You alright there, Margie?”
“No, I just think I’m gonna barf.” [stands up] “Well, that passed. Now I’m hungry again.”
TODAY’S MOVIE DIVA AWARD GOES TO MS. KIM HILLYARD! NICE WORK KIM!

Tuesday’s Quizzer is…….
When you curtail a word, you remove the last letter and still have a valid word. You will be given clues for the two words, longer word first.

8. Paralysis of a body part with uncontrolled tremors -> Friends

The second’s biggest distinction is found
Bearing the symbol of love that is bound.

The third should be biggest but that can depend,
Never standing alone or it may offend.

The fourth is oft used when making a selection
Or if you should need a gun for protection.

The fifth is the fattest and oddest by far,
And can sometimes be found in a wrestling war.

LOOK for answers to today’s quizzlers in THURSDAY’S Jokes, Quotes, Quizzlers & Teases!  Like this newsletter? Want to receive it daily? Also, if you are on the list and do not want to continue to receive this email and would like your name removed from this distribution list, please send an email to the Eucman at Eucstraman@hotmail.com.https://dailyjokesquotesquizzlersandteases.wordpress.com/
RECOMMENDED WEBSITE LINKS:
http://www.slampi.org., http://www.hopeBUILD.org. http://www.GodLovesPraise.com. https://elisabethluxe.com.  www.themuscleministry.com.
CHECK OUT MY BOOK online at https://www.amazon.com/dp/B07FF669PT/ref=sr_1_1?s=digital-text&ie=UTF8&qid=1531337765&sr=1-1&keywords=The+Banquet+Servers+Hand+Guide#
Amazon.com: The Banquet Servers Hand Guide (Basic) eBook: Euclid Strayhorn: Kindle Store
http://www.amazon.com