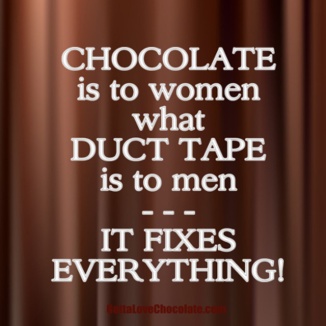 ~ If you’ve got melted chocolate all over your hands,
you’re eating it too slowly.
~ Chocolate covered raisins, cherries, orange slices &
strawberries all count as fruit, so eat as many as you
want.
~ The problem: How to get 2 pounds of chocolate home from
the store in hot car. The solution: Eat it in the parking
lot.
~ Diet tip: Eat a chocolate bar before each meal. It’ll
take the edge off your appetite and you’ll eat less.
~ A nice box of chocolates can provide your total daily
intake of calories in one place. Isn’t that handy?
~ If you can’t eat all your chocolate, it will keep in the
freezer.
~ But if you can’t eat all your chocolate, what’s wrong
with you?
~ If calories are an issue, store your chocolate on top
of the fridge. Calories are afraid of heights, and they
will jump out of the chocolate to protect themselves.
~ If I eat equal amounts of dark chocolate and white
chocolate, is that a balanced diet? Don’t they actually
counteract each other?

That’s my story and I’m sticking to it! HAVE A GREAT WEEKEND PEOPLE!
Whatever you do, don’t forget to LAFF IT UP! Peace, I am outta here, Eucman!
DAILY QUOTES…

“In other weird Japanese news – or as they call it in Japan, news – there are now plans for a park in Japan that will be a combination of a hot springs spa and an amusement park.

It either sounds nice or like a sanitary nightmare.” -James Corden

“Two Connecticut residents stole over $1,000 worth of candles from the Yankee Candle
Village. The suspects are being described as white.” -Conan O’Brien

“Tonight was the lighting of the Rockefeller Center Christmas tree. Thousands of people waited for hours in the cold just to go, ‘Cool. OK, back to the hotel, let’s go back to the hotel.'” -Jimmy Fallon

G U A R A N T E D T O M A K E Y O U L A F F….
One day on his way to work, my husband stopped at the cafeteria as it began to rain. Forgetting that he hadn’t brought an umbrella, he reached for the nearest one when he got up to leave. “That’s my umbrella,” a woman immediately scolded.
Abashed at his mistake, he apologized and walked on to his office. He was drenched by the time he arrived. Once there, he discovered three umbrellas that he had left in the office over the months, and he decided to bring them home at the end of the day.
That afternoon he ran into the same woman who had confronted him earlier.

She looked at the umbrellas, then at him, and tartly remarked: “Did real well for yourself today, didn’t you?”

Thursday’s Movie Trivia of the day!‘ What movie is this quote from???

“He’s a southpaw. I don’t want you messing with southpaws. They do everything backwards.”
“Southpaw nothing! I’ll drop him in three.”

Answer: Rocky
In this scene, heavyweight boxing champion Apollo Creed (Carl Weathers) has chosen Philadelphia club fighter Rocky Balboa (Sylvester Stallone) to be his next opponent based on Rocky’s nickname “The Italian Stallion”. He smells a marketing bonanza. But his trainer (Tony Burton) starts reading Rocky’s data sheet, notices he is left-handed and says line one. A confident Apollo Creed replies with line two. In the events leading up to this scene the regularly-scheduled opponent to Apollo has to withdraw at the last minute and Philadelphia fight promoter Jergens (Thayer David) scrambles to find a suitable opponent. When none of the obvious choices are available, Apollo suggests giving a local underdog a shot.

Friday’s Movie Trivia of the day! What movie is this quote from???

“Well, at least I don’t have to move over to let a funeral go by, man.”
“Your car is uglier than I am. Oops, that didn’t come out right.”

Thursday’s Quizzer is…….
There was once a college that offered a class on probability applied to the real world.
The class was relatively easy, but there was a catch. There were no homework assignments or tests, but there was a final exam that would have only one question on it.
When everyone received the test it was a blank sheet of paper with a solitary question on it: “What is risk?”
Most students were able to pass, but only one student received 100% for the class! Even stranger was that he only wrote down one word!
What did he write?
Answer: The brilliant student wrote down: “This.”
And handed in the paper. By doing this, the student demonstrated that he understood that having your grade based on one exam is risky. Plus, putting just one word on such an important exam and hoping the professor understands what he means is risky in and of itself!
Friday’s Quizzer is…….

The blanks in the following sentences will be filled in with three different homonyms (words that are spelled differently but sound alike) to make valid sentences. The dashes indicate the number of letters in the words. Can you fill in the blanks?