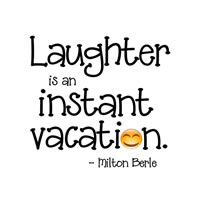 – Never trust a dog to watch your food. Patrick, Age 10
– When you want something expensive, ask your grandparents. Matthew, Age 12
– Wear a hat when feeding seagulls. Rocky, Age 9
– Never try to hide a piece of broccoli in a glass of milk. Rosemary, Age 7
– Don’t flush the john when your dad is in the shower. Lamar, Age 10
– Never bug a pregnant mom. Nicholas, Age 11
– Never tell your mom her diet’s not working. Michael, Age 14
– When you get a bad grade in school, show it to your mom when she’s on the phone. Alyesha, Age 13
– Never try to baptize a cat. Laura, Age 13
– Never spit when on a roller coaster. Scott, Age 11
– Never tell your little brother that you’re not going to do what your mom told you to do. Hank, Age 12
– Remember you’re never too old to hold your father’s hand. Molly, Age 11
– Listen to your brain. It has lots of information. Chelsey, Age 7
– Never dare your little brother to paint the family car. Phillip, Age 13

Laughter is a sense of proportion and a power of seeing yourself from the outside. — Zero Mostel

Laughter is God’s hand on the shoulder of a troubled world. — Bettenell Huntznicker

Laughter is the corrective force which prevents us from becoming cranks. — Henri Bergson

Laughter is the foundation of reconciliation. — St. Francis de Sales

Laughter is the loaded latency given us by nature as part of our native equipment to break up the stalemates of our lives and urge us on to deeper and more complex forms of knowing. — Jean Houston

Laughter is the shortest distance between two people. — Victor Borge

Laughter is the sun that drives winter from the human face. — Victor Hugo

Laughter lets me relax. It’s the equivalent of taking a deep breath, letting it out and saying, ‘This, too, will pass’. — Odette Pollar

Laughter opens the lungs, and opening the lungs ventilates the spirit. — Unknown

Laughter serves as a blocking agent. Like a bulletproof vest, it may help protect you against the ravages of negative emotions that can assault you in disease. — Norman Cousins

Guaranteed to Roll Your Eyes….
A friend of mine was visiting a college, which had those
security call boxes every few hundred feet. If you were
wandering around the campus at night and felt uneasy about
somebody following you, for instance, you could hit the
button and have a security officer come investigate im-
mediately.

One of these phones had a sign that said, “Out of Order.”

Underneath it someone had scrawled, “Keep Running!”

Tuesday’s Movie Trivia of the day!‘ What movie is this quote from???  “What’s the most you’ve ever lost in a coin toss?”

Answer:  No Country for Old Men! Javier Bardem’s portrayal of the sociopath, Anton Chigurh in the 2007 Best Picture film, “No Country for Old Men” won him the Best Supporting Actor Oscar. Early in the film, Chigurh asks this question of a gas station owner in southern Texas, telling the man to call the flip of his quarter. The man says that he didn’t bet anything with which to call the coin, but Chigurh states that he’s been putting the stake up his whole life. The man calls the coin correctly and receives his lucky quarter as the prize. Chigurh tells the man not to put it into his pocket with his other loose change because it’s his lucky quarter. Tossing it with the rest turns it into just another coin. Later on, Chigurh gives the same chance to Carla Jean Moss (portrayed by Kelly MacDonald) and she calls Chigurh on the situation instead saying that he’s the one who has the choice, and not the one who calls heads or tails on the coin. The film, in question, involves a drug trade gone wrong. After one man finds a case containing millions of dollars, he fights to keep it for himself, but finds others after it as well. There’s just no clean escape.

Wednesday’s Movie Trivia of the day! What movie is this quote from??? “I’m making waffles!”

Tuesday’s Quizzler is…. Five people (3 girls: Katie, Anna, & Grace and 2 boys Chris & Michael) are going to the beach. Each of them brought something different, a different colored towel, plans to do something and eat something. Figure out what each person brought with them, the color of their towel, what they will do at the beach, and what they will eat. Good luck!

The purple towel got a lot of use from the girl who was tanning.

The sunscreen had to be waterproof because the user got really wet.

Of course the surfer had to bring his surfboard from home.

Eating her snow cone in the shade of her umbrella kept it from melting on her blue towel.

Ketchup, from his snack, dripped all over a boy’s red towel leaving red drops all over it.

Only the boys got more than their feet wet.

Katie asked Anna if she thought the owner of the yellow towel would mind if Katie put her cooler on his towel while he surfed.

The seashell collector spread out her findings on her pink towel.

Anna remembered her sand bucket but didn’t have enough money to get a snocone after paying for her nachos.

The bucket wasn’t used for playing in the sand.

The hamburger was ordered with just mayo, mustard, and pickles.

The hotdog eater had a little sunscreen taste to the dog because it dripped from his water soaked hair.

Being so fair skinned Michael had to be sure to use his high spf sunscreen when out in the water.

The girl who played in the sand used her umbrella to shade her.

The contents of the cooler contained Coke, chips, water, and ice.

Anna is worried about wrinkles and doesn’t like to tan

Can you find 13 animals hidden in these words?