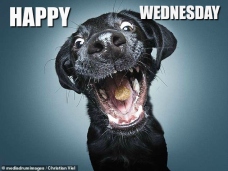 What You Get When You Marry…

* A telephone operator? (He gives you a phone-y line.)

* An elevator operator? (He lets you down.)

“A controversial 1,200-year-old document has been found that shows evidence

that Jesus was married. I don’t believe it. What married guy gets to spend
all his free time with his 12 buddies?” -Conan O’Brien
“The Cleveland Zoo announced today that its rare black rhinoceros is pregnant.
They made the announcement right after she confirmed it with her rhino-cologist.” -Seth Meyers
“Chipotle is considering opening a new restaurant that specializes in hamburgers.
After what their burritos did, Chipotle now wants to ruin a new set of buns.” -Jimmy Fallon

A little boy was waiting for his mother. As he waited, he was approached by a man who asked,

“Son, can you tell me where the Post Office is?”
The little boy replied, “Sure! Just go straight down this street two blocks and turn to your right.”
The man thanked the boy kindly and said, “I’m the new pastor in town. I’d like you to come to
Church on Sunday. I’ll show you how to get to Heaven.”
The little boy replied with a laugh; “You’re kidding me, right?
You don’t even know the way to the Post Office.” 😳😁

Tuesday’s Movie Trivia of the day!‘ What movie is this quote from??? “I never told you, but you sound a little like Dr. Seuss when you’re drunk”.

Answer: The Sixth Sense!
The quote “I never told you, but you sound a little like Dr. Seuss when you’re drunk” comes from the famous opening scene to the movie, “The Sixth Sense” (1999). The quote is referring to the way Malcolm’s voice sounds unstable and out-of-it when he is drunk, kind of like Dr. Seuss’s voice. Malcolm and Anna are having a romantic evening in their room when they realize they’re not alone. Malcolm is shot and the movie starts off with Malcolm trying to help Cole (Haley Joel Osment) sort out his issues with ‘dead people’. Malcolm is portrayed by Bruce Willis, and the film was nominated for Best Picture at the Academy Awards.

Wednesday’s Movie Trivia of the day! What movie is this quote from???

“You’re spoiled, vengeful and bloody! Your poetry is sour and your music is worse.”

Tuesday’s Quizzler is…. Here are some well-known expressions rewritten into “Cliff-ese”. For those of you who don’t know what that means, he was a very wordy person on the TV show “Cheers” and never used a small word where a larger one would work. Try to figure out the phrases in simpler terms.

1. To place a primitive agricultural conveyance in a position anterior to the animal Equus caballus.

2. It requires a number of people greater than one to perform a terpsichorean series of low dips and twisting steps on the toes.

3. To accumulate an excess of temperature beneath a circular, tight-fitting clothing component.

4. Emanating from a culinary vessel into a site of pyrogenic activity.

Answer: 1. Putting the cart before the horse.
2. It takes two to tango.
3. Get hot under the collar.
4. Out of the frying pan and into the fire.

Wednesday’s Quizzler is…….  Below is a sonnet called “Washington Crossing the Delaware”, written by David Shulman in 1936.  Besides being an epic retelling of an epic historical happening, what is so amazing about this poem?