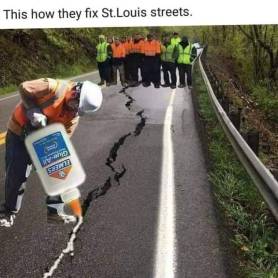 Here’s a peek at a page from the Stupid persons guide to life!  Do you find day-to-day life hard? Do you wish life had an instruction booklet? Do you wish your brain had an owner’s manual? If you answered “yes” to any of these questions, you’ve come to the right place. This page provides, free of charge, a short “guide to life.” In here, you’ll find most of the information you need to live life day by day without inadvertently maiming yourself.

Read carefully. Carry out each instruction to the letter.

That’s my story and I’m sticking to it! Have a great Thursday people & whatever you do, don’t forget to LAFF IT UP! Peace, I am outta here, Eucman!

“The remarkable thing about Shakespeare is that he really

is very good, in spite of all the people who say he is very good.”
– Robert Graves
“For a successful technology, reality must take precedence
over public relations, for Nature cannot be fooled.”
– Richard Feynman
“I believe love is primarily a choice and only sometimes a
feeling. If you want to feel love, choose to love and be
patient.” –Gordon Atkinson
“Often the hands will solve a mystery that the intellect

has struggled with in vain.” –Carl G. Jung

“In Mexico, the world’s heaviest man, who weighs almost
1,000 pounds, is preparing for surgery. The man said, ‘After
years of being unhappy with my appearance, I’m finally
getting that nose job.'” -Conan O’Brien
“A town in Texas just announced a controversial plan to

recycle toilet water and use it for drinking water. Dogs said,
‘How are you only thinking of this now?'” -Jimmy Fallon
“New research suggests that people who are more ambitious
will live longer. While people who are less ambitious will

There was a little boy who had just learned to count on his fingers. One day his uncle

came to visit and the boy was anxious to show off his newly acquired skill. He told

the uncle to ask him and addition question. So they uncle asked, “What is three plus four?”

The little boy counts it out on his fingers and said, “Seven.”

The uncle said, “Listen kid, you can’t count it out on your hands because someday when

you are in school, a teacher will get mad at you for it. Now put your hands in your pockets.”

So the little boy put his hands in his pockets and his uncle asked, “What is five plus five?”

After a few moments of intense concentration the boy said, “Eleven.” 😱😁😎

Wednesday’s Movie Trivia of the day!‘ What movie is this quote from??? “I don’t know about this beaming stuff. Is it safe?”
“Oh yes, sir. Snotty beamed me up twice last night. It was wonderful.”

Answer:  Spaceballs!
In this scene Commanderette Zircon (Leslie Bevis) has just asked President Skroob “Shall I have Snotty beam you down, sir?” He is apprehensive and asks the question in the first line. She replies with the second line. George Lucas (the “Star Wars” director) was a big fan of Brooks’ previous films and his company (Industrial Light and Magic) constructed the light sabers for “Spaceballs.” A recurring line from this movie is “May the Schwartz be with you,” which is a parody of the “Star Wars” line “The Force will be with you, always.” Mel Brooks not only directed this movie and co-wrote the screenplay for it but he also acted in it as both President Skroob and Yoghurt.

Thursday’s Movie Trivia of the day! What movie is this quote from??? ​“Just tell me how much he owes and I’ll pay you back.”
“So far, it’s about 1.3 million dollars.”

Some English words are usually paired with a hyphen. The rules for this are

interesting to browse, and some word pairs can even be correctly written

This teaser invites you find a commonly hyphenated word-pair inside a pair of words.
e.g. undisCLOSEd – cUPbearer gives us CLOSE-UP

… and a triple!
5. Acknowledge – Excited – Footballer

A 3-letter word has been taken out of each of the following words.

The letters may not be adjacent, but they are in order. Can you figure it out?

LOOK for answers to today’s quizzlers in FRIDAYS, Jokes, Quotes, Quizzlers & Teases!  Like this newsletter? Want to receive it daily? Also, if you are on the list and do not want to continue to receive this email and would like your name removed from this distribution list, please send an email to the Eucman at Eucstraman@hotmail.com.https://dailyjokesquotesquizzlersandteases.wordpress.com/