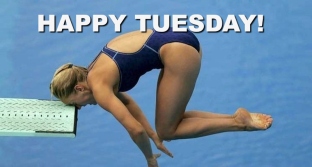 PLEASE READ! Thank goodness there’s a name for this disorder. Somehow I feel better even though I have it!! This is how it manifests: I decide to water my garden.  As I turn on the hose in the driveway, I look over at my car and decide it needs washing.  As I start toward the garage, I notice mail on the porch table that  I brought up from the mail box earlier.  I decide to go through the mail before I wash the car.   I lay my car keys on the table, put the junk mail in the garbage can under the table, and notice that the can is full.  So I decide to put the bills back on the table & take out the garbage first.  But then I think, since I’m going to be near the mailbox when I take out the garbage anyway, I may as well pay the bills first.  I take my check book off the table, and see that there is only one check left.   My extra checks are in my desk in the study, so I go inside the house to my desk where I find the can of Coke I’d been drinking.   I’m going to look for my checks, but first I need to push the Coke aside so that I don’t accidentally knock it over.  The Coke is getting warm.  I decide to put it in the refrigerator to keep it cold.  As I head toward the kitchen with the Coke, a vase of flowers on the counter catches my eye.  They need water. I put the Coke on the counter and discover my reading glasses that I’ve been searching for all morning.   I decide I better put them back on my desk, but first I’m going to water the flowers.  I set the glasses back down on the counter, fill a container with water and suddenly spot the TV remote, someone had left it on the kitchen table.
I realize that tonight when we go to watch TV, I’ll be looking for the remote, but I won’t remember that it’s on the kitchen table, so I decide to put it back in the den where it belongs.  But first I’ll water the flowers.  I pour some water in the flowers.  Quite a bit of it spills on the floor.  So, I set the remote back on the table, get some towels and wipe up the spill.   Then I head down the hall trying to remember what I was planning to do.

At the end of the day:  the car isn’t washed, the bills aren’t paid, there is a warm can of  Coke sitting on the counter,  the flowers don’t have enough water, there is still only 1 check in my check book, I can’t find the remote, I can’t find my glasses, and I don’t remember what I did with the car keys.   Then, when I try to figure out why nothing got done, I’m really baffled because I know I was busy all day,  and I’m really tired.  YOU see recently, I was diagnosed with A.A.A.D.D. – Age Activated Attention Deficit Disorder. I realize this is a serious problem, and I’ll try to get some help for it, but first I’ll check my e-mail….. Do me a favor.  Forward this message to everyone you know, because I don’t remember who the heck I’ve sent it to. Don’t laugh — if this isn’t you yet, your day is coming…… Hey I’m just saying! That’s my story and I’m sticking to it! Have a Happy Tuesday people and whatever you do, don’t forget to laff it up! Peace, I am outta here! Eucman!

When I asked about his size, the woman looked stumped at first, then her face
brightened. She held up her hands, forming a circle with her forefingers and thumbs.

“I don’t know his size,” she said, “but my hands fit perfectly around his neck.”😳😁

Tom Swift was an adventure hero created by American writer Victor Appleton. In the books, almost all of Tom’s remarks were written with an adverb or adverbial phrase. From this style, the term “Tom Swifty” has come to be used for this form of word play.

Tuesday’s Quizzler is…….
What word when you remove the first letter and put it at the end, do you get the past tense of the word?
LOOK for answers to today’s quizzlers in WEDNESDAYS, Jokes, Quotes, Quizzlers & Teases!  Like this newsletter? Want to receive it daily? Also, if you are on the list and do not want to continue to receive this email and would like your name removed from this distribution list, please send an email to the Eucman at Eucstraman@hotmail.com.https://dailyjokesquotesquizzlersandteases.wordpress.com/
RECOMMENDED WEBSITE LINKS: