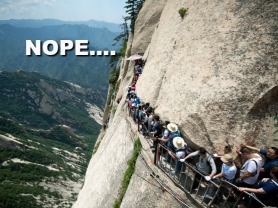 The Washington Post had a contest wherein participants were asked to tell the younger generation  how much harder they had it “in the old days.” Winners, runners-up, and honorable mentions are listed below.
Second Runner-Up: In my day, we couldn’t afford shoes, so we went barefoot. In winter,
we had to wrap our feet with barbed wire for traction.
First Runner-Up: In my day, we didn’t have MTV or in-line skates, or any of that stuff. No, it was 45s and regular old metal-wheeled roller skates, and the 45s always skipped, so to get them to play right you’d weigh the needle down with something like quarters, which we never had because our allowances were way too small, so we’d use our skate keys instead and end up forgetting they were taped to the record player arm so that we couldn’t adjust our skates, which didn’t really matter because those crummy metal wheels would kill you if you hit a pebble anyway, and in those days roads had real pebbles on them, not like today.
And the winner: In my day, we didn’t have rocks. We had to go down to the
creek and wash our clothes by beating them with our heads.
Honorable Mentions:
In my day, we didn’t have fancy health-food restaurants. Every day we ate lots of easily recognizable animal parts, along with potatoes.
In my day, we didn’t have hand-held calculators. We had to do addition on our fingers.
To subtract, we had to have some fingers amputated.
In my day, we didn’t get that disembodied, slightly ticked-off voice saying ‘Doors closing.’ We got on the train, the doors closed, and if your hand was sticking out, it scraped along the tunnel all the way to the next station and it was a bloody stump at the end. But the base fare was only a dollar.
In my day, we didn’t have water. We had to smash together our own hydrogen and oxygen atoms.
Kids today think the world revolves around them. In my day, the sun revolved around the world, and the world was perched on the back of a giant tortoise.
Back in my day, ’60 Minutes’ wasn’t just a bunch of gray-haired, liberal 80-year-old guys. It was a bunch of gray-haired, liberal 60-year-old guys.

Back in my day, they hadn’t invented electricity. We had to watch television by candlelight.

prepared to shop with friends. What’s the first toy a little boy wants? A gun–he’s prepared for traffic.” –Jason Chase

____________________________________________________________________________
Guaranteed to Roll Your Eyes….
One of my friends works in the customer service call center of a national pager company. He deals with the usual complaints regarding poor pager operation, as well as the occasional crank caller demanding to be paged less often, more often, or by more interesting people.
The best call came from a man who repeatedly complained that he keeps being paged by “Lucille.” He was instructed that he would have to call her and tell her to stop paging him.
“She don’t never leave no number, so I can’t call her back,” he said.
After three such calls, someone thought to ask how he knew it was Lucille if she didn’t leave a number.
“She leaves her name,” was the reply.
After establishing that the customer had a numerically pager, the light bulb came on.
“How does she spell her name?” the service rep asked.

Answer: This is a true story from Taiwan. When the rich man reached the phone booth he found a carrier pigeon in a cage. It had a message attached telling the man to put the diamond in a small bag which was around the pigeon’s neck and to release the bird.
When the man did this the police were powerless to follow the bird as it returned across the city to its owner.

Friday’s Quizzler is…….
In each sentence below, two words are incomplete. The two words end in the same three letters, so they look like they should rhyme, but they don’t. See if you can figure out the missing letters in each sentence.
Example: One symptom of bronchitis is a ro___ co___. (The two words are: rough & cough.)

LOOK for answers to today’s quizzlers in MONDAYS, Jokes, Quotes, Quizzlers & Teases!  Like this newsletter? Want to receive it daily? Also, if you are on the list and do not want to continue to receive this email and would like your name removed from this distribution list, please send an email to the Eucman at Eucstraman@hotmail.com.https://dailyjokesquotesquizzlersandteases.wordpress.com/
RECOMMENDED WEBSITE LINKS: