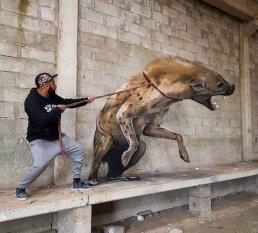 Here’s the story…..
A man is waiting for wife to give birth. The doctor comes in and informs the dad that his son was born without torso, arms or legs. The son is just a head! But the dad loves his son and raises him as well as he can, with love and compassion. After 21 years, the son is old enough for his first drink. Dad takes him to the bar and tearfully tells the son he is proud of him.
Dad orders up the biggest, strongest drink for his boy. With all the bar patrons looking on curiously and the bartender shaking his head in disbelief, the boy takes his first sip of alcohol. Swoooop! A torso pops out! The bar is dead silent; then bursts into a whoop of joy. The father, shocked, begs his son to drink again. The patrons chant “Take another drink”! The bartender still shakes his head in dismay. Swoooop! Two arms pops out. The bar goes wild. The father, crying and wailing, begs his son to drink again. The patrons chant, “Take another drink”! The bartender ignores the whole affair. By now the boy is getting tipsy, and with his new hands he reaches down, grabs his drink and guzzles the last of it. Swoooop! Two legs pop out. The bar is in chaos. The father falls to his knees and tearfully thanks God. The boy stands up on his new legs and stumbles to the left…. then to the right…. right through the front door, into the street, where a truck runs over him
and kills him instantly. The bar falls silent. The father moans in grief. The bartender sighs and says,  “That boy should have quit while he was a head.” 😱😳😁😎
Hey I’m just saying. That’s my story and I’m sticking to it! Have a GREAT
THURSDAY people, stay safe, and whatever you do, don’t forget to laff it up!
Peace, I am outta here! Eucman!

Answer:  If there is not enough light to READ, JUST READJUST the lamp.

Thursday’s Quizzler is…….
This teaser is based on ‘funny’ alternative definitions a word could have if you broke the word up into its syllables and treated the syllables as words in themselves. I will provide a list of words or names and a list of definitions, it is your job to match them up.
They are meant to be a bit light hearted and may not have perfect pronunciation so work the words in your head a bit. Having the definitions should provide help in this regard. Also note that sometimes the ‘new word’ syllables may not only be using one syllable in the word.
An example would be:
Word: Contemplate “Con template”: A stencil that criminals are made from.
Words:
Primate
Innovation
Awesome
Control
Bernadette
Definitions:
A short, ugly inmate
The act of removing your spouse from in front of the TV
A rousing applause for the motel/hotel
The act of torching a mortgage

A unit of measurement for the number of rowing implements used

LOOK for answers to today’s quizzlers in FRIDAYS, Jokes, Quotes, Quizzlers & Teases!  Like this newsletter? Want to receive it daily? Also, if you are on the list and do not want to continue to receive this email and would like your name removed from this distribution list, please send an email to the Eucman at Eucstraman@hotmail.com., https://dailyjokesquotesquizzlersandteases.wordpress.com/
RECOMMENDED WEBSITE LINKS: