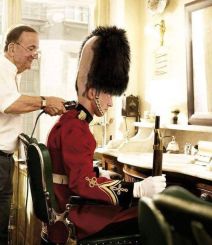 Tips to improve your writing….
1. Do not put statements in the negative form.
2. Verbs have to agree with their subjects.
3. Proofread carefully to see if you words out.
4. If you reread your work, you can find on rereading a great deal of repetition can be avoided by rereading and editing.
5. A writer must not shift your point of view.
6. And don’t start a sentence with a conjunction. (Remember, too, a preposition is a terrible word to end a sentence with.)
7. Don’t overuse exclamation marks!!
8. Place pronouns as close as possible, especially in long sentences, as of 10 or more words, to the irantecedents.
9. Writing carefully, dangling participles must be avoided.
10. If any word is improper at the end of a sentence, a linking verb is.
11. Take the bull by the hand and avoid mixing metaphors.
12. Avoid trendy locutions that sound flaky.
13. Everyone should be careful to use a singular pronoun with singular nouns in their writing.
14. Always pick on the correct idiom.
15. The adverb always follows the verb.


Answer:  Every cloud has a silver lining.
Cirrus, cumulus, and stratus are types of clouds. Ag is the chemical symbol for silver.
Tuesday’s Quizzler is…….
Each sentence below contains a word that can be anagrammed to answer or describe the sentence.
Example: Craft that might tip in the ocean. Answer: Canoe (Anagram of ocean)
1. Bit of brush
2. Opposite of unite
3. Writings of a steno
4. They affix without paste
5. Having less reason for fears
6. Animal that may need a shoer

Excerpted from an old Reader’s Digest

LOOK for answers to today’s quizzlers in WEDNESDAYS, Jokes, Quotes, Quizzlers & Teases!  Like this newsletter? Want to receive it daily? Also, if you are on the list and do not want to continue to receive this email and would like your name removed from this distribution list, please send an email to the Eucman at Eucstraman@hotmail.com., https://dailyjokesquotesquizzlersandteases.wordpress.com/
RECOMMENDED WEBSITE LINKS:
http://www.slampi.org, https://elisabethluxe.com, http://www.themuscleministry.com.
CHECK THIS BOOK OUT online at https://www.amazon.com/dp/B07FF669PT/ref=sr_1_1?s=digital-text&ie=UTF8&qid=1531337765&sr=1-1&keywords=The+Banquet+Servers+Hand+Guide#, Amazon.com: The Banquet Servers Hand Guide (Basic) eBook: Euclid Strayhorn: Kindle Store.