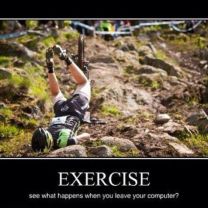 THINKING OUT LOUD………..
Why is it when two planes almost hit each other it is called a “near miss”? Shouldn’t it be called a “near hit”?
What does Geronimo say when he jumps out of a plane?
Why do they sterilize the needles for lethal injections?
How do you KNOW it’s new and improved dog food?
Why do they put locks on the doors of 24-hour stores?
What do they use to ship Styrofoam?
Why is it called rush hour when everything moves so slow?
Why do they call then express lanes when during rush hour everything is stopped?
Why is abbreviation such a long word?

If sour milk is used to make yogurt, how do you know when yogurt has gone bad?

9. Mrs. Minn’s history class was the only class that had field trips and Lindsay loved them!

Answer:
Billy/Science/A/Mr. Bobo
Jessica/Physical Education/B/Mr. Briggs
Lenny/Math/A-/Mrs. Cooper
Lindsay/History/C/Mrs. Minn
Samuel/English/D/Mrs. Runner
Friday’s Quizzler is…….
Everyone knows and loves Disney Characters, so I have created a little challenge to test your knowledge of the many characters created by the Disney Studios over the years.
Can you figure out the characters represented by each clue below? Good luck and have fun reminiscing about all these memorable characters!
1. To act really strange, silly and funny
2. Smallest and farthest planet from the sun
3. Rhymes with picky house
4. Very short skirt + rhymes with house
5. Name for a Mafia boss + not young + avoid being hit
6. Opposite of light + the appendage of a bird used for flying + bird that goes “quack”
7. Type of flower + rhymes with luck
8. Tint or shade of a color + E + moisture found on grass in the morning + E + and + in _____ of (also rhymes with clue) + E
9. A round disc used as money in poker + and + canyon or lowland
10. Obscene, indecent or lecherous (rhymes with crude) + synthetic hair worn by woman + Von + D + tool used to sweep leaves
LOOK for answers to today’s quizzlers in MONDAYS, Jokes, Quotes, Quizzlers & Teases!  Like this newsletter? Want to receive it daily? Also, if you are on the list and do not want to continue to receive this email and would like your name removed from this distribution list, please send an email to the Eucman at Eucstraman@hotmail.com., https://dailyjokesquotesquizzlersandteases.wordpress.com/
RECOMMENDED WEBSITE LINKS:
http://www.slampi.org, https://elisabethluxe.com, http://www.themuscleministry.com.
CHECK THIS BOOK OUT online at https://www.amazon.com/dp/B07FF669PT/ref=sr_1_1?s=digital-text&ie=UTF8&qid=1531337765&sr=1-1&keywords=The+Banquet+Servers+Hand+Guide#, Amazon.com: The Banquet Servers Hand Guide (Basic) eBook: Euclid Strayhorn: Kindle Store.