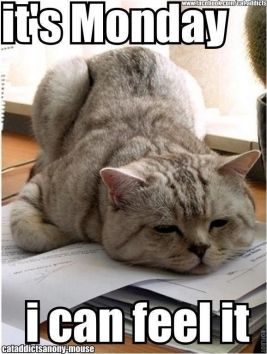 WELCOME to Monday, September 18, 2017.
Marriage Definitions….
BACHELOR: A nice guy who has cheated some nice girl out of her alimony.
BRIDE: A woman with a fine prospect of happiness behind her.
COMPROMISE: An amiable arrangement between husband and wife whereby they agree to let her have her own way.
DIPLOMAT: A man who can convince his wife she would look fat in a fur coat.
GENTLEMAN: A husband who steadies the stepladder so that his wife will not fall while she paints the ceiling.
HOUSEWORK: What the wife does that nobody notices until she doesn’t do it.
HUSBAND: A man who gives up privileges he never realized he had.
JOINT CHECKING ACCOUNT: A handy little device which permits the wife to beat the husband to the draw.
LOVE: An obsessive delusion that is cured by marriage.
MOTHER-IN-LAW: A woman who destroys her son-in-law’s peace of mind by giving him a piece of hers.
MRS.: A job title involving heavy duties, light earnings, and no recognition.
SPOUSE: Someone who will stand by you through all the trouble you wouldn’t have had if you’d stayed single in the first place.
WIFE: A mate who is forever complaining about not having anything to wear at the very same time that she complains about not having enough room in the closet.
That’s my story and I’m sticking to it! Have a great Monday people and whatever you do,
don’t forget to LAUGH IT UP! Peace, I am outta here, Eucman!
DAILY QUOTES...
“I heard that Hillary will actually be signing books at a Costco in Connecticut. It’s going to be awesome when someone gets to the front and goes, ‘Oh, I thought this was the line for cheese samples. I’m sorry. Can you sign a cheese sample?'” -Jimmy Fallon
“A college student in Georgia was worried that his parents would be mad at him for flunking English.
So he tried to fake his own kidnapping. The parents figured it out when the ransom note said, ‘We has your son.'” -Conan O’Brien
“Musician and prospective Senate candidate Kid Rock gave a political speech last night in Detroit and said, ‘I love black people and I love white people, too, but neither as much as I love red, white and blue. ‘ Oh, God – he’s gonna win.” -Seth Meyers
G U A R A N T E D T O M A K E Y O U L A F F….
Finishing up our work at a trade show in San Diego, my co-worker Maureen and I decided to go sightseeing across the border in Tijuana, Mexico. While there, we went shopping and bought a few pieces of clay kitchenware.
As we crossed back into the United States, a customs official asked if we had anything of value to report.
“Not really,” Maureen replied, digging in her bag for the bean crock she had purchased.
Everyone around us froze as she continued, “I only bought a little pot.”😎
Friday’s Movie Trivia of the day!‘ What movie is this quote from???
‘This house has many hearts.’
ANSWER: Poltergeist! That little old lady says this when someone mentions ‘the heart of the house’.
Monday’s Movie Trivia of the day!‘ What movie is this quote from??
‘Shoes? Animals don’t wear shoes…’
Friday’s Quizzler is……….
Your task is to find words that, after taking their first letters away, have related meanings.
Example: Behead an animal and leave an animal (FOX, OX).
1. Behead a musical instrument and leave a musical instrument.
2. Behead a margin and leave a margin.
3. Behead to liquefy and leave to liquefy.
4. Behead to ascend and leave to ascend.
5. Behead a proper name and leave a proper name.
ANSWER: 1. FLUTE-LUTE  2. BRIM-RIM   3. SMELT-MELT  4. ARISE-RISE  5. MABEL-ABEL

Monday’s Quizzler is……….
Yeah, they keep me locked up, but I guess I’m thankful, in short.
I hand out the beatings, while my neighbors import and export.
We make a good team, especially me as the muscle,
But with two dozen guards, I’m glad we never tussle.
But really, I got a lotta my own connections,
Imports, exports, with thousands collectin’.
But between us, there’s really no competition,
I call it harmonizin’ cause we’re on the same mission.
No one is unnecessary, or, you know, too small,
The guy upstairs is the boss of it all.
He’s also incarcerated, but for his good I bet it is,
Business is good, so long as we get the messages.
Question: Who’s doing the talking, and who are the other players in this riddle?
(there are a total of 28, minus the narrator’s connections)
LOOK for answers to today’s quizzlers in TUESDAYS Jokes, Quotes, Quizzlers & Teases!  Like this newsletter? Want to receive it daily? Also, if you are on the list and do not want to continue to receive this email and would like your name removed from this distribution list, please send an email to the Eucman at Eucstraman@hotmail.com.https://dailyjokesquotesquizzlersandteases.wordpress.com/
LINKS: http://www.slampi.org., http://www.hopeBUILD.org. http://www.GodLovesPraise.com, http://www.stlzoo.org